You may or you may not have heard about our pop album video game Sayonara Wild Hearts. If not, I can tell you that it’s an action game with pop music about a heartbroken woman who finds a diamond butterfly in her dreams, which leads her to a parallell dimension where she transforms into a masked biker called The Fool.

Sayonara Wild Hearts is inspired by the arcade games (OutRun, Space Harrier) we loved in our youth and the pop music (Sia, Chvrches) around us every day. It’s a game about making peace with yourself and escaping in pop culture (Café Racer motorcycles, ”Sailor Moon,” ”Akira”). And also about riding motorcycles, skateboarding, dance battling, shooting lasers, wielding swords. Etcetera.

This release is special, because it marks the end of a journey that has now spanned over almost five years — this is the final release of Sayonara Wild Hearts which means that a long (and sometimes difficult) journey comes to an end for our small team.

I hope you will enjoy Sayonara Wild Hearts. Let’s pop! 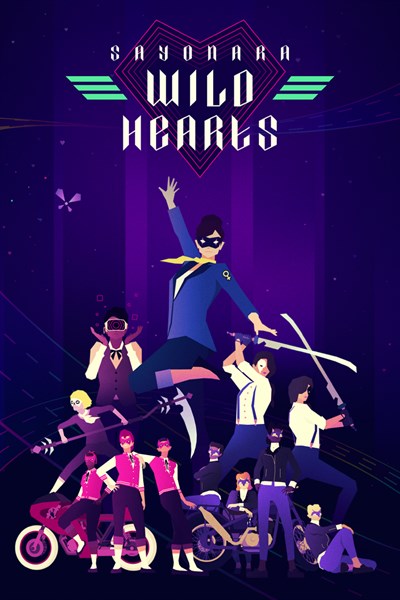 ☆☆☆☆☆
★★★★★
Sayonara Wild Hearts is a euphoric music video dream about being awesome, riding motorcycles, skateboarding, dance battling, shooting lasers, wielding swords, and breaking hearts at 200 mph. As the heart of a young woman breaks, the balance of the universe is disturbed. A diamond butterfly appears in her dreams and leads her through a highway in the sky, where she finds her other self: the masked biker called The Fool. Travelling through futuristic cities, dark forests, and electric deserts, The Fool sets out to find the harmony of the universe, hidden away in the hearts of Little Death and her star crossed allies; Dancing Devils, Howling Moons, Stereo Lovers and Hermit 64.