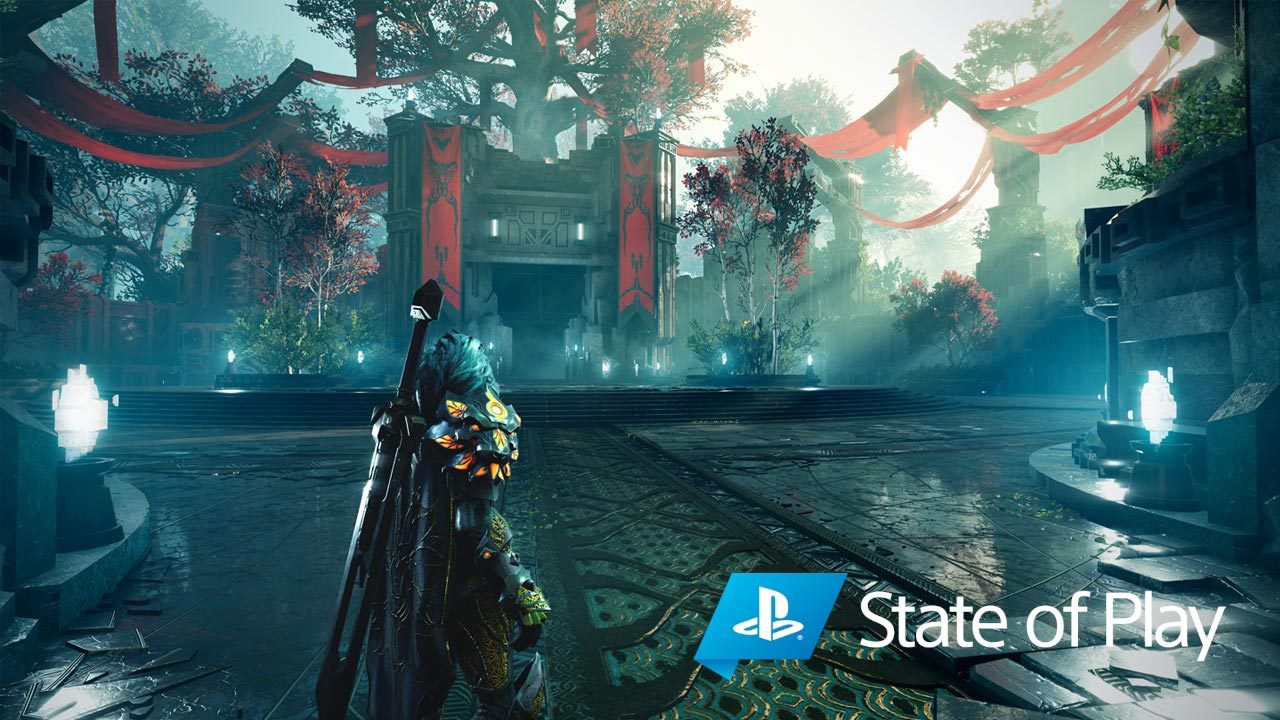 The first time you see footage of a new looter-slasher, the most natural question is, “How does it feel when you play?” That’s certainly the most common question we’ve received since unveiling Godfall.

How is it going to feel as you play? Well, we’re excited to show you.

Godfall takes advantage of the PlayStation 5 DualSense controller’s novel mechanics to produce a kinesthetic, tactile combat experience that’s as gratifying in your hands as it is on the screen. We accomplish this in several ways.

First, we take advantage of the DualSense controller’s haptic feedback to simulate a variety of surfaces and textures. Imagine walking along a marble floor — the way it feels different through your boots compared to walking over gravel, dirt, or a rain-slicked field. If you were sliding along a fiery molten floor, say in the heat of battle to dodge an enemy attack, you would sense the unique surface without needing to look at it.

It was important for us to reflect that difference in your hands. As you adventure through the elemental realms, you’ll be pitted against mobs of enemies in gilded halls with smooth marble flooring. You’ll also clash with fiends in the dirt. As your controller is your connection to the action, the physicality of the controller’s haptics must reflect the different spaces you’ll be fighting in.

The second is by using the DualSense controller’s adaptive triggers. A unique PlayStation 5 feature, adaptive triggers modulate resistance on the R2 and L2 inputs to give players a real, physical sense of what they’re doing on screen.

In Godfall, you will bring the fight to your enemies using five different weapons classes, and we wanted to make sure that each one plays and feels unique. We accomplished this using adaptive triggers, so the piercing thrust of your Polearm doesn’t glide with the same heft as your two-handed Warhammer.

By default, light attacks are mapped to R1 and heavy blows to R2. When the hits are coming fast and heavy, X evades an enemy attack and a double-tap executes an evasive slide. This is where Godfall combat comes alive.

You are a Valorian knight, a god-like warrior that is unique in all the realm for their ability to don Valorplates, armor sets with legendary history and unique characteristics. A mastery of the Valorplates and the five weapon classes will serve you well through your assent to challenge the mad god at the game’s climax.

We have plenty to share about these weapon classes closer to release, but today are excited to get you better acquainted with two of them.

The first is the Dual Blades which, as the name suggests, are a pair of light, agile weapons excellent for making quick work of soft, vulnerable opponents. You can combo quick slashes with four consecutive light attacks or hit hard with a heavy Blade Cyclone.

As you build up charge over time with the Dual Blades, you’re able to activate Inner Focus, a special ability that buffs attack damage for a brief duration. Another signature move? Mortal Coil, where you throw your blade into an enemy and yank them toward you, closing the distance.

The second is the Longsword, a balanced, versatile weapon for a wide variety of enemies. Not unlike the Dual Blades, the Longsword can also string together four light attacks, but stands out with a heavy Attack Finisher to put a devastating exclamation point at the end of the combo.

The Longsword has three signature moves. Spectral Flurry is a heavy damage dealer that can’t be interrupted by foes. Spiral Technique works best to take down a number of enemies lined up in a row. Shield Uppercut works only if your timing is just right: at the end of a Longsword swing, a flash of white signals your brief opportunity to land a violent blow.

That’s right, your Valorian knight has a shield as well. It is a core part of combat that can block enemy attacks, parry blows when timed perfectly, and even reflect projectiles.

A core tenet of Godfall is that the best defense is a great offense. The game rewards you for playing aggressively, and that is reflected in the shield mechanics as well. Your shield can be thrown to deal blows to several targets, swept in a 360-degree arc to petrify the enemies around you, used to deliver a powerful wave attack emanating out in every direction, or employed as a tool to control the space as you shield warp toward an enemy to deliver a Spectral Blow.

And for enemies that fall prone to the ground, an R3 ground finisher with your shield is the last thing they’ll ever see.

It’s not just these monsters and enemy knights that will counter you on your journey, but also mid-bosses and end bosses intent on cutting your campaign short. These heavier challengers will require a tactician’s eye for noticing patterns, evading strikes and seizing upon opportunities to defeat your foes.

The mid-boss we’re showing off today is the Phalanxer, a weightier knight with brilliant, ornate armor and an aggression beyond reason. Miss your timing and you’ll meet the business end of his mace, but use your wit to control the arena and you just might win the day.

We’re excited to show you more of the surprises Godfall has to offer in the coming months, but for now this will have to satisfy your sense of feel until you can get a DualSense controller in your hands and a Valorplate on your shoulders later this year.