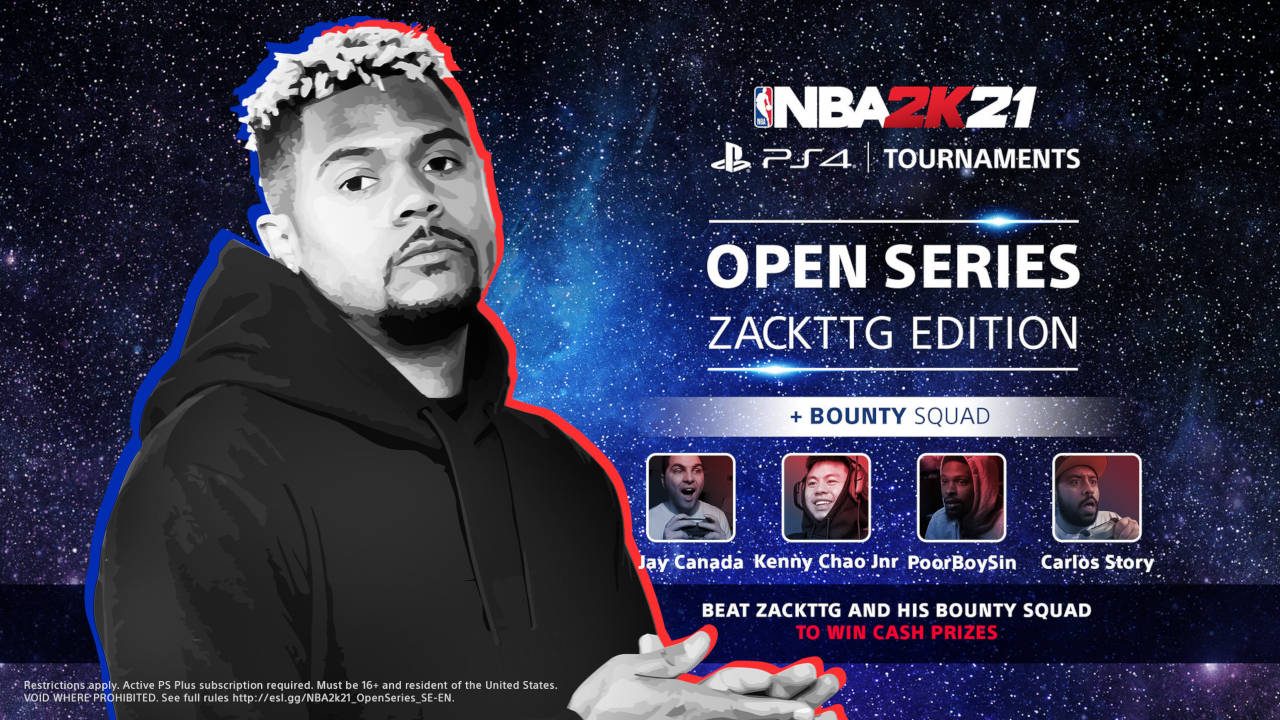 The NBA Season might be over but the excitement continues in NBA 2K. November’s Open Series is going to be absolutely huge, as top NBA 2K21 Creators rock up on the virtual court.

ZackTTG captains an All-Star Bounty Squad of the biggest and best NBA 2K Creators in the world right now. You could be invited to play against one of them 1v1 for cash dolla.

Zack himself is a YouTube NBA 2K superstar, with 78 million views and 1.6 million followers.

Anyone who knows NBA 2K, will know that’s a lineup of serious ballers.

Winning will be difficult, but entry couldn’t be simpler.

All NBA 2K21 Open Series participants this November will be entered into the draw to play a Special Edition Match against a Creator for cash and glory!

Registration opens October 30 with the first round of qualifying taking place on Wednesday November 4 and Thursday November 5.

Play the biggest creators in the game

The big names on the Bounty Squad:

These guys will be the first to tell you they’re among the best. But are they all talk?

If you’ve ever watched them play and thought ‘I could beat them’, now’s your chance.

The Bounty Squad are all that stands in your way of making it rain.

To raise the stakes even higher, you’ll be playing to a massive audience of NBA 2K superfans. This is a chance to make a name for yourself on the biggest stage.

Plus, you’ll pick up sweet NBA 2K21 prizes in the Open Series itself like exclusive themes and avatars for placement and participation.

Only those who participate in a weekly Open Series qualifier this November will have a chance to play in the Special Edition Matches.

Once you’re in the draw, you could be invited to play a member of the Bounty Squad the following week.

The Open Series itself is a Swiss Format. Excel through four rounds of competitions against players of similar skill to reach the Monthly Finals. Only the top eight qualify. Win that Monthly Final, and your journey from amateur to all-star will be complete.

The Open Series is open to anyone* and is the quickest way to open up a whole new world of cash prizes and exclusive NBA 2K21 rewards.

What are you waiting for? Your All-Star status is just a few wins away. Visit compete.playstation.com to learn more and sign up to play.

*Restrictions apply. Active PS Plus subscription required. Must be 16+ and a resident of the United States. Void where prohibited. See full rules http://esl.gg/NBA 2K21_OpenSeries_SE-EN.