Norse mythology really had its day in the sun this year with the likes of Assassins Creed: Valhalla and Rune II: Decapitation Edition, but perhaps the boldest embodiment of the acid-soaked Viking warrior lifestyle comes to us through RatDog Games’ fast-paced rogue looter-shooter, Gunnhildr.

Chock full of techno-space-wizardry and Nordic namedropping, Gunnhildr spins a tale of betrayal, imprisonment, and the certainty of hundreds of deaths as players try, die, and try again in earnest to escape the confines of Niflhel (Nordic space jail). Players step into the boots of Gunnhildr, an ancient member of the Niflheim warrior class who was thrown in jail for challenging the gods and their handling of the economic disaster plaguing Yigdrasil. With the help of a quirky (if not tiring) hooded stranger named “Lucky”, players start each run by breaking out of their cell and wreaking havoc throughout the prison. 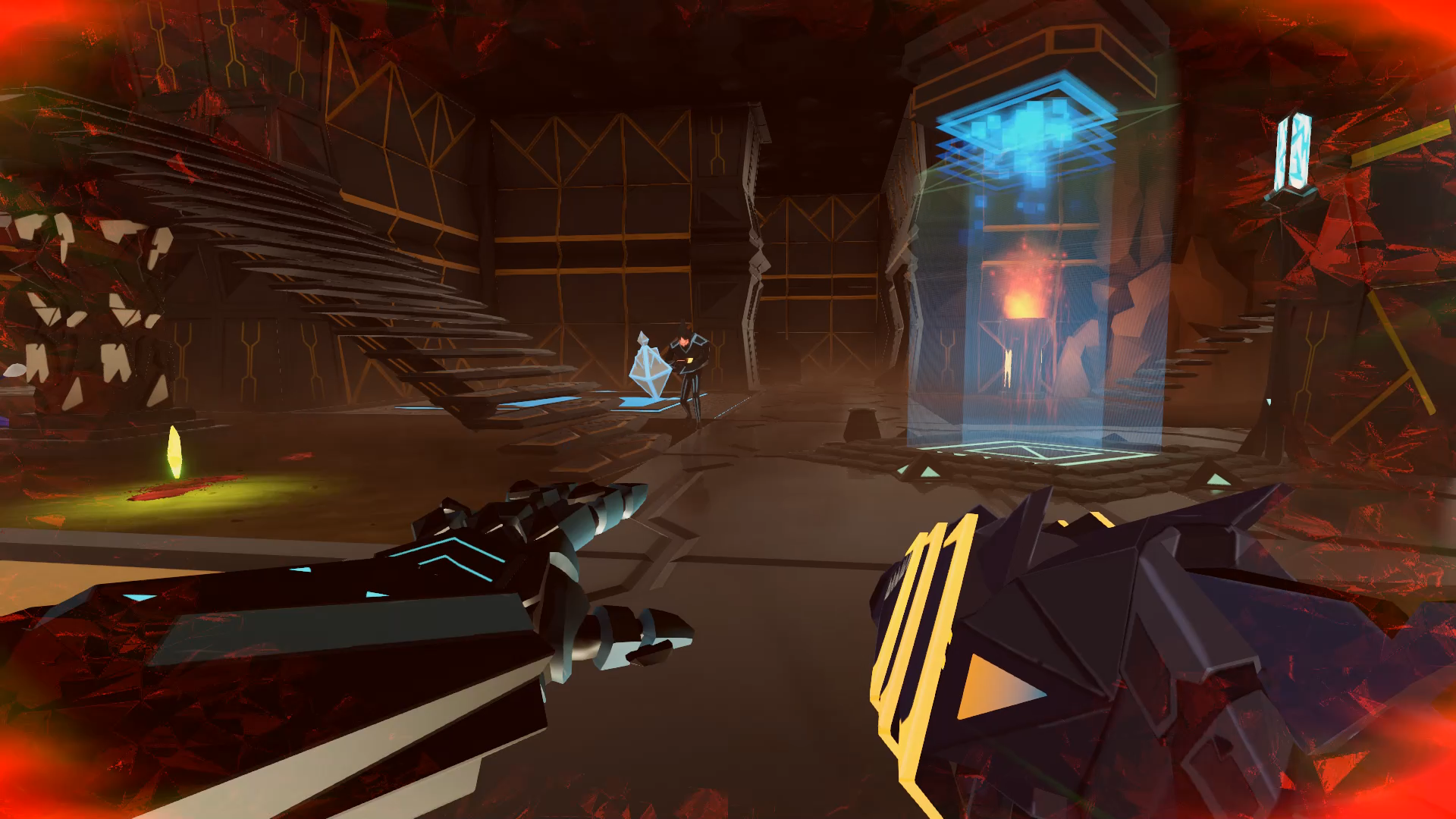 As with a majority of roguelikes, each run in Gunnhildr promises to be unique through the use of procedurally generated maps, bonuses, weapons, and hidden rooms. This is somewhat limited in that there is only a small set of room designs, but their arrangement within the world itself changes substantially enough each time to still feel novel. Each room has a chance of containing the world’s single form of all-use currency, Halite, along with the possibility of secret rooms, item chests, or upgrade modules. The developers did a fantastic job with the verticality of each room, but there are times where players can feel ambushed with enemies spawning right on top of them in a crowded hallway.

The gameplay itself has the pace of a Greyhound race where the dogs were fed nothing but coffee beans and trucker speed, largely in part to the developer’s emphasis on encouraging movement. Weapons run on Halite charges and can quickly overheat, and while players could either spend their own halite to refuel or simply hunker behind a wall and wait for a cooldown, jumping and dodging plays a substantial part in draining the extra heat to bring you back to combat-readiness. In fact, given the layout of most of the rooms and the ratio of mobbing enemies, waiting in a sheltered corner oftentimes isn’t an option, so darting to and fro amidst the chaos becomes your best chance at survival (and murder). I was actually quite fond of this mechanic because it encouraged players to experience the game as the developers intended without otherwise feeling forced.

In addition to keeping things spicy with randomly generated maps, Gunnhildr makes every run special through the use of wildly varying passive traits, weapon mods, and equipment (or knacks). In addition to receiving passive upgrades to dashes, heat sinks, health, or overall damage whenever you clear a room, players can start each run with powerful weapon or grenade mod that can range from flaming projectiles to black hole grenades. Additional mods can either be purchased from random chests or altars, or found in one of the game’s many secret rooms (look for intricately carved wall panels, hint hint).

Apart from the run-based upgrades, players can also permanently upgrade Gunnhildr and unlock extra jumps and dashes through Lucky’s store at the start of each new run. A portion of Halite from a previous run comes back with you each time you die, so players can purchase these oftentimes expensive upgrades slowly over time. As a word of advice, spend time unlocking your dashes and jumps first, then move on to unlocking the perk for collecting additional halite, this cuts your grinding time in half!

What initially caught my eye and convinced me to open up the store page was Gunnhildr’s visuals. Take out all the statues of Thor and graffiti disparaging the Jotun and you’ve got yourself a beautiful sci-fi shooter set in a space station famous for its raves and confusing architecture. The vibrant colors and cel-shading really bring this game to life and shrug off the severity of the plot. Explosions, projectiles, and status effects look incredible, and most of the set dressing in each room fits nicely (questionable bloodspatter aside). One thing I will mention is the somewhat confusing contrast between the visuals at large and the strange stone altars strewn throughout each run. These statues of Norse gods almost look like they came from a different asset pack, and were tossed in because the game is based on Norse mythology. It distances me from the experience a bit when I come across one of these, especially since it doesn’t actually seem to serve any purpose.

Unlike the visuals, the audible portion of Gunnhildr is fairly hit or miss. The music is fine and the firing sounds and explosions are perfect, but the voice acting is a bit discordant. Lucky, the protagonist’s savior and guide, delivers most of the exposition in a roundabout way through tiny anecdotes in between fights, and honestly it’s not that bad. What truly begins to grate on the nerves is the constant quips he lands while you’re in the middle of a firefight. If he tells me to go rip the core from an enemy one more time I will lose my freaking mind. The enemy and prisoner voiceovers are equally at odds with the quality of the game, and most sound like the same voice actor speaking in different falsetto pitches. Suffice it to say, the visual aesthetic of the game is on point but the audio needs some love.

Being that it’s just now in Early Access, Gunnhildr is currently limited to one of four environments, five of 12 weapons, and 39 of over 150 promised upgrades and powerups. While that sounds fairly limited, the weapons themselves appear to vary wildly with additional perks, and the procedural generation nips any map-based boredom in the bud. The monotony strikes with enemy types and behaviors. The majority of rooms will sport a mix of three creatures: A hapless human in a toga whose only contribution is herding you into a corner, a squat monster that chucks bombs and turns invisible, and a taller soldier who can chuck grenades and fire a burst of projectiles (after advertising for a few seconds beforehand). This became fairly prosaic after the ninth run, and it wasn’t until I made it to the berserker and boss where things finally spiced up a bit.

Another thing that really cringes my hinges is the difficulty. I completely understand that roguelikes of this nature rely on difficulty to keep the game alive and the experience replayable. That being said, enemy projectiles actually seem to seek you out, and even though I could teleport across the room in the blink of an eye, the AI tracking me never let up and I was constantly met with a series of grenades whenever I tried skirting out of the way of danger. I’m all for the Dark Souls experience of dying more times than I can count in order to serve the greater good, there’s a certain satisfaction in knowing your stack of bodies could reach the heavens (as the world’s soggiest stepladder). But this has to come from the inherent difficulty of the environment, the enemies, and their numerosity. Tracing bullets and a constant awareness of my location feels more like cheating than an honest challenge, and it made several untimely deaths rather frustrating.

Gunnhildr‘s Early Access debut shows an immense amount of promise. The fast-paced gameplay, randomness, and neon-dream visuals combine to form an entertaining and grindworthy experience for fans of first-person shooters and roguelites alike. While the Norse mythology falls a bit to the wayside and the difficulty curve and audio need attention, Gunnhildr is built from sturdy bones and has the potential to thrive. RatDog Games certainly have their hands full with the majority of content still to come, but they’re off to an extremely promising start.