There are moments throughout life where one must stop what they’re doing and reflect on how to draw the line between borderline acceptable and downright deplorable, between the last shred of sanity and the cold embrace of madness. I’m thrilled to say I reached that point about midway through Empyrean’s new simulator, Body of Evidence, and happily erred on the side of blood-soaked insanity. Follow me now as we explore the sunny world of body disposal, heroin addiction, and luminol.

Having moved away from the mundane task of house flipping, Empyrean turned down the graphics and turned up the macabre to give us all a taste of the low-poly criminal underworld. Body of Evidence drops players into the shoes of Mark, a ticket-taker-turned-cleaner who flits from scene to scene disposing of bodies and cleaning up blood spatter. From run-ins with the government and serial killers (same thing, amirite?) to conversations with Elvis and Slenderman, Body of Evidence’s plot twists and turns like a coked-up Tarantino movie, which is to say every Tarantino movie. Pop culture references abound and the game’s store page certainly doesn’t lie when it says it leans heavily on dark humor (some could even say it’s dead weight, buh-dum-tsss).

Body of Evidence is broken down into 30 unique scenes that require the player’s cleaning expertise, and no two jobs are alike. A double homicide in a cabin, a barroom brawl gone bad, and an unfortunate incident at the sushi restaurant are only a few examples of the various jobsites players get to visit. While the main goal often doesn’t stray far from getting rid of the body and scrubbing down the evidence, many of the scenes offer bonus tasks or dialogue tree-dependent progression that moves the plot along and offers a nice reprieve from what could never be considered a boring chore. In addition, each level is infinitely replayable and scores players based on their thoroughness, so perfectionists will have a field day chasing that sweet 100% checkmark across the map.

Alongside dragging bodies to and fro like the world’s loneliest dance partner, Mark must scrub, sweep, and patch drywall in order to hide his clients’ dirty deeds. Cleaning on my hands and knees isn’t something I like to do in real life, but there was a pleasant simplicity in it that almost felt meditative, and while scrubbing bloodstain after bloodstain bordered on boring towards the latter half of the game, Body of Evidence did their best to spice it up with variables like soap (thank you, Tyler Durden) and luminol. Locating the murder weapon, picking locks, and hunting down collectibles are also on the to-do list, and the countdown timer for each level infused a level of urgency that required some creative problem solving on more than one occasion. There are even a few examples of platforming that changed the gameplay up just enough to keep things spicy. It was no Mirror’s Edge, but I appreciated the effort. 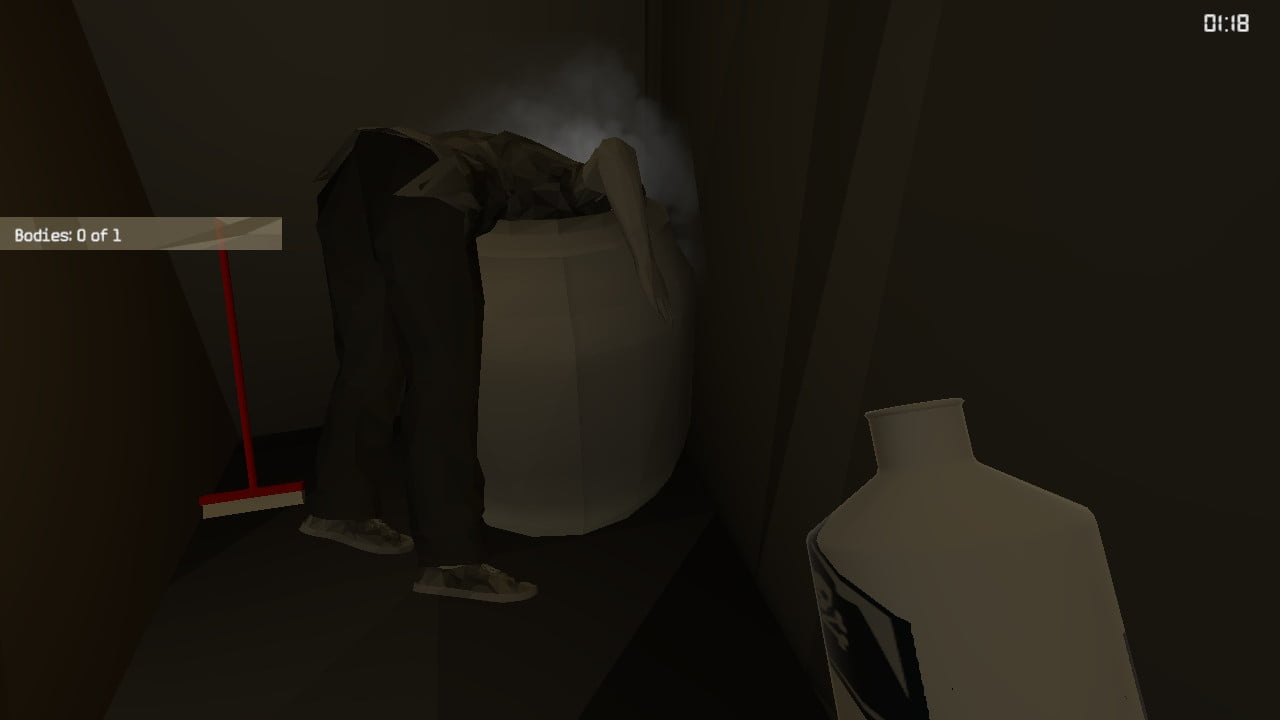 Empyrean opted for a low-poly noir aesthetic for their grim little sim, but there was still an incredible level of detail in each scene. From a caged mouse running on a wheel to sheets of rain caressing the windows of a cozy lake house, the developer’s focus on the small things really brought an otherwise dead atmosphere to life with impressive efficiency. And though I touched on this earlier, the sheer level of variety in each scene is a massive feather in Empyrean’s cap that kept me from dozing off as I swept up broken glass and viscera across a plethora of different locales. There is a strong design emphasis on scantily clad ladies that borders on creepy, but I’m chocking this up as heroin-induced hallucinations that play on Mark’s intense loneliness.

While the game’s visual aesthetic was detailed and pleasing, the sound effects and music were regrettably repetitive and unimaginative, giving me the impression that this was the last thing the developers worried about before launch. Tossing in a little variability with the scrubbing and sweeping noises would have added to the immersion, and the decision to voiceover the mission brief but not the character dialogue was an odd choice. 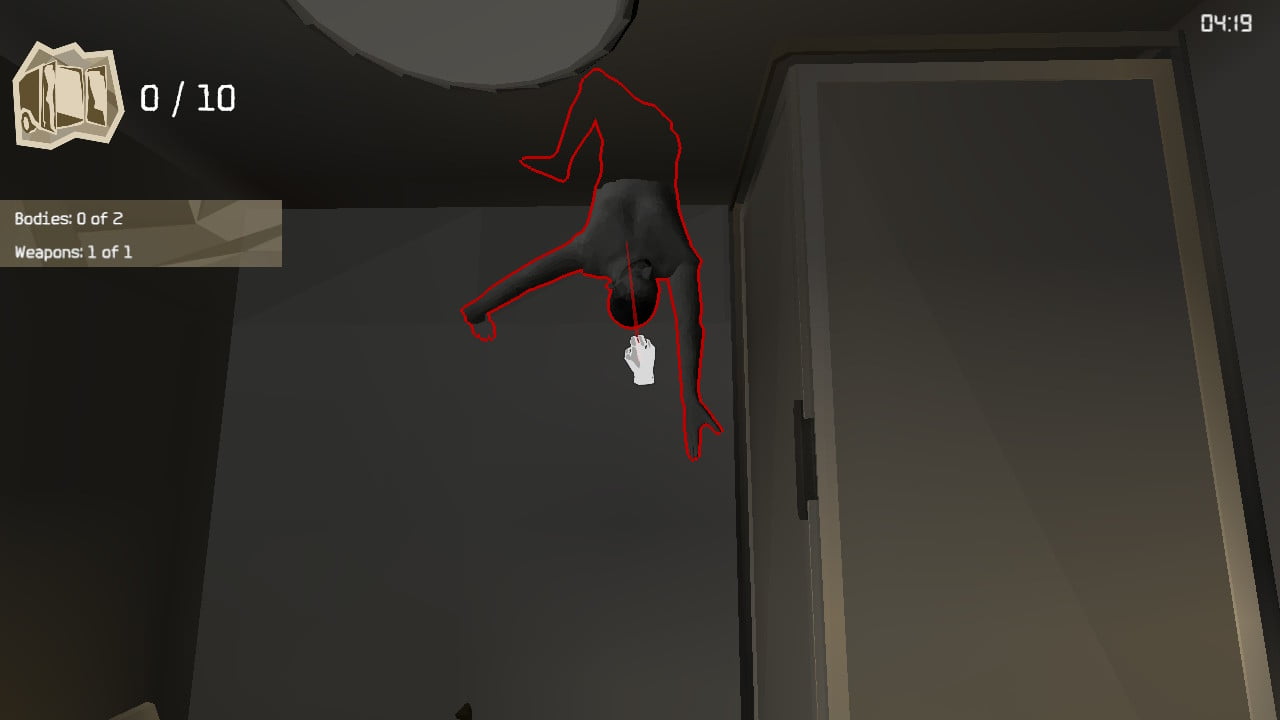 As with any game that emphasizes physics, Body of Evidence produced several hilarious glitches that resulted in bodies flying across the map or launching themselves through walls. While this required restarting the level I couldn’t help but appreciate the situation from Mark’s perspective, who perhaps had a moment to reflect on his life choices as he yanked Jane Doe’s jittering corpse from the ceiling. Fun bugs aside, Body of Evidence crashed twice through my initial playthrough, marking a first for my Switch experience and requiring a full blown re-launch rife with grumbling.

My time with Body of Evidence was time well spent, and while I won’t be changing my profession anytime soon, it was a delightfully bleak and much-needed escape from reality. It’s a simple, entertaining game that doesn’t overreach or overpromise, and I would be absolutely thrilled to see DLC for extra levels.

Body of Evidence is a quirky little sim chock full of macabre moments that are sure to bring out your inner serial killer. While scrubbing, sweeping, and dragging corpses around all day runs the risk of feeling repetitive, the developers did a wonderful job constructing a series of detailed levels and interspersing variable gameplay to keep things interesting. Several crashes and some questionable audio are the only things holding this grisly game back.