I love video games and love working with talented teams from all over the world to bring these games to Xbox One! Today, I want to share a story of how Totally Reliable Delivery Service came together.

On a rainy Seattle afternoon just over a year ago, I was playing this prototype of a physics-based video game and talking to Kyle, the lead of We’re Five Games on what it could end up becoming. The prototype had these physics-powered characters trying to do everyday chores and solving puzzles. You would control the movement, and individual arms as they stumble about in an entertaining way. Picking up objects, throwing them at each other, using bouncing pads — all set in a sizable open world.

And then suddenly, in the middle of the call, I started giggling like a kid. I felt this wonderful joy of playing a video game. There was a puzzle that involved using a vehicle to build a bridge to get over an obstacle. Instead, my character was completely OK with picking up a bunch of boxes and stacking them. The joy came from comedy surrounding how accurately the character controller interprets weight — the weight of objects you pick up. “This should be a game about boxes,” was the idea. You pick up a box, and your character’s weight shifts with it. This would be absolutely fun in online multiplayer. “This should be a multiplayer game about boxes,” we said.

Having seen a compilation video the day before, one of terrible postage deliveries — of drivers throwing boxes onto porches, suddenly the game’s vision formed. “This should be an open world multiplayer game about terrible delivery drivers.” Totally Reliable Delivery Service! We were a go. I had only recently moved to the U.S., and it was kind of wild to see that you’d get Amazon packages just dropped off on your porch. It’s surreal. I’ve lived in The Netherlands and around Eastern Europe before, and seeing how the delivery industry works in the U.S. feels like satire. One that mostly everyone could relate to.

We quickly did some testing with gameplay that revolved around local multiplayer, and it was insane fun – you’d have one player piloting a plane, while the other three are daisy-chained together and the final one is holding a package. We noticed we’d just wander off into the world to do different random adventures. We had an overall goal, and just side-tracked into activities like in any good old open world game. The difference though is that gameplay is emergent. I’m a huge believer in emergent gameplay, having spent thousands of hours in Minecraft. With the idea verified, we set on to developing it with the team at We’re Five Games behind the steering wheel.

We were pretty sure the game would find a wide audience. What we didn’t anticipate is how wide of a family audience it would be. Showcasing the game at PAX showed that families love playing it together. Media builds showed that influencers who typically play horror games or shooters love jumping into an online match together, creating for some really interesting and emergent narrative. You’ve probably seen your favorite Youtuber make a series of Totally Reliable Delivery Service videos. And I believe you’re in for a treat for the full game – we’ve added a lot of new content. 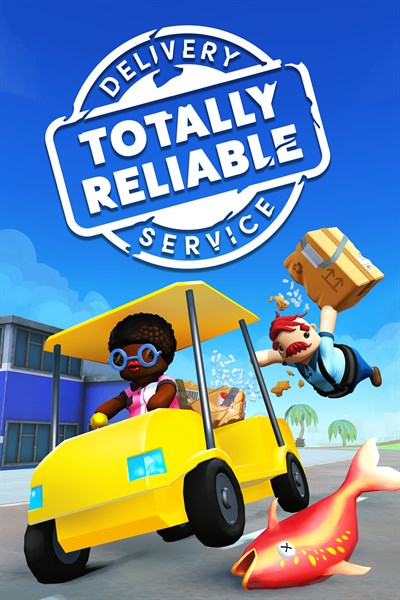 ☆☆☆☆☆ 23
★★★★★
Xbox Game Pass
Buckle up your back brace and fire up the delivery truck, it’s time to deliver! Join up to three of your friends and haphazardly get the job done in an interactive sandbox world. Delivery attempted, that’s a Totally Reliable Delivery Service guarantee! FEATURES: Local and Online Multiplayer: Go it alone to ensure the safety of your deliveries, or join your friends and put your teamwork to the test. Controlled Noodly Chaos: Unpredictable ragdoll physics meets snappy platforming. Sprint, leap, dive, and grapple with ease, but collide with something and you’ll be knocked out cold! A World of Distractions: Take a break from deliveries and play around! The world is chock full of toys, vehicles, and machines that can be used for work or play. Ragtag Crew: Customize your blue-collar workers and get your rear into gear, it’s time to deliver!