Today marks the fifth anniversary of the day PlayStation VR was introduced to the world, and we want to take this moment to thank all of our fans and our talented development community for embracing this platform and supporting PS VR through the years. It’s amazing to see how virtual reality has really established itself in these past five years as a platform for gaming, and we’re pleased to have PS VR play a big role in VR’s growth.

And to celebrate this PS VR milestone, we wanted to give a special thank you to PlayStation fans: Starting in November, PlayStation Plus* members will get three PS VR bonus games for no extra charge. Stay tuned for more details in the PlayStation Plus update in the next few weeks.

Since the PS VR launch, we have seen a diverse range of unique experiences that showcase a sense of presence we set out to achieve with this platform, including critically acclaimed games such as the thrilling sights and sounds action shooter Rez Infinite, the epic rescue mission platformer Astro Bot Rescue Mission, and the stealth action of Hitman 3.

With more than 500 games and experiences available on PS VR, let’s take a look back at the top five most played** games on PS VR worldwide since launching five years ago. 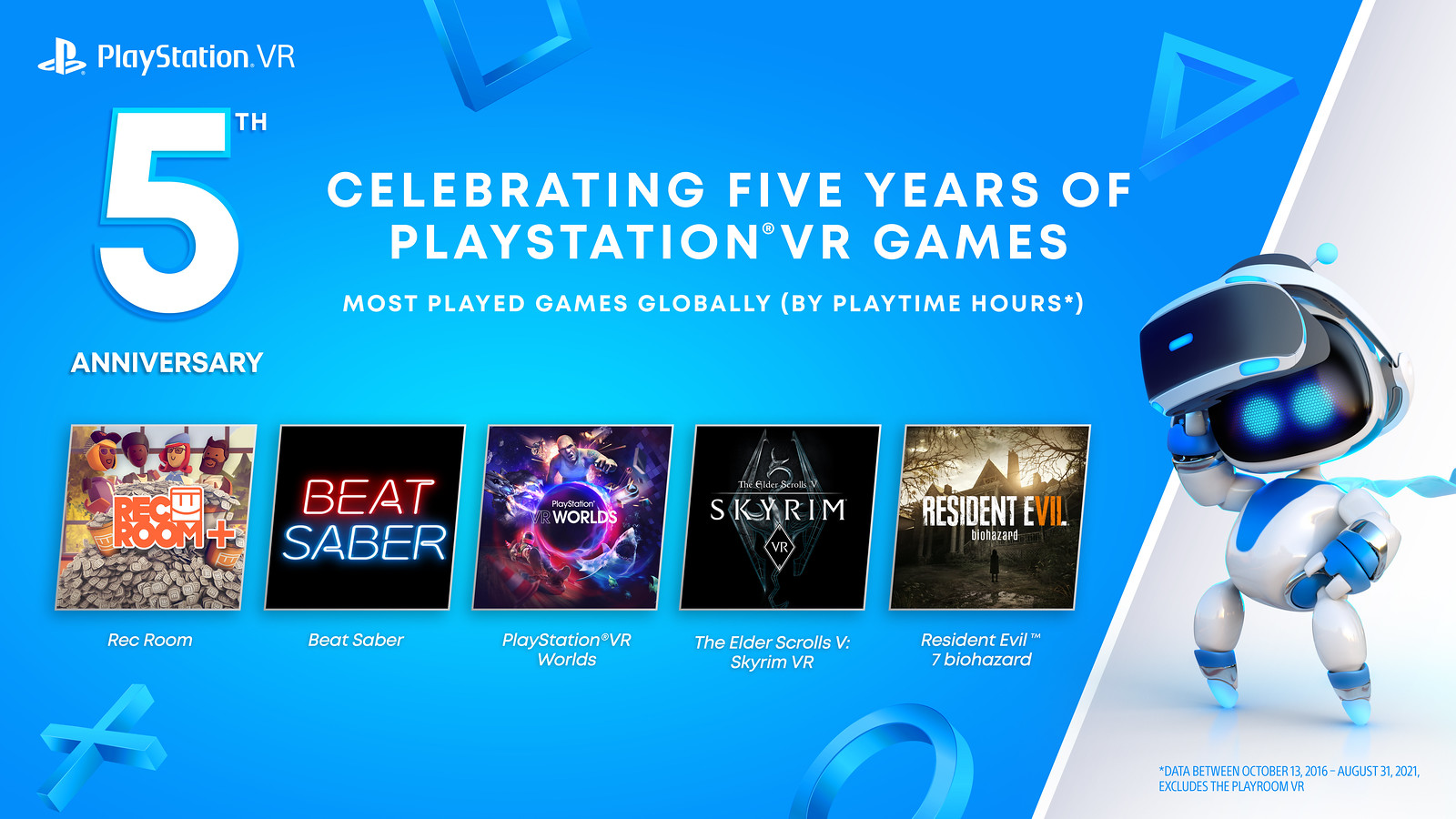 There’s plenty more PS VR games to look forward to, with games in development  such as Moss: Book II, Wanderer, After the Fall, Humanity, Puzzling Places, Zenith: The Last City and more. The games created for PS VR come from some of our industry’s most talented developers who consistently challenge themselves to bring amazing experiences to the platform.

To mark this occasion, we decided to take a trip down memory lane with developers who share with us what their experience was like when they first got their hands on PlayStation VR.

Can you tell us about your first experience with PS VR?

We were working on a VR prototype in 2015 and had been talking to the PS VR team. I wasn’t still sure about what PS VR could do at that time and they encouraged me to check out the demos at that year’s GDC in March 2015. The London Heist demo completely sold me on the hardware and its potential. The first scene had you being interrogated by a brutish looking fellow and he would respond to your head movements and where you were looking. The second scene you were rifling through a desk looking for items with full hand interaction using Move Controllers and then getting into a fire fight while taking cover behind the desk.  It was the most high quality content I had experienced in VR at the time and I found myself getting on the floor of the demo area at GDC. Exhilarating!

VR was technology  I was always interested in, so I was very excited hearing that PlayStation was creating a VR headset for a household setting. The first time I got to really experience PS VR was working on the prototype for KITCHEN, which was arguably the prologue setting things up for what later would become Resident Evil 7 biohazard. Initially, I had only seen the prototype through a regular monitor and could only imagine how things would be in a VR environment, but I was not anticipating just how much the scare factor ramped up seeing things from within the headset. It really was astounding to see how much more immersive of an experience VR could truly be.

As far as I can recall, my first experience of PS VR was actually with a prototype of Project Morpheus (the codename of PS VR in its early phase) where I found myself at the top of a very high diving board with an Olympic pool right below me. This demo was meant to show how we can get a sense of vertigo in VR. And it worked remarkably well.

As a gamer, I have great memories of playing Thumper on PS VR around the launch in 2016.  The heady mix of insanely high speeds, beautiful worlds and rhythm based play come together to create a game which is incredibly tight and compelling.  I was also blown away by getting to be the Dark Knight in Batman: Arkham VR, it helped me realise the immersive power of being a character in PS VR could be a game changer for how we could make games in the future.

I remember way back in 2016 getting a sneak preview of London Heist at Carnegie Mellon University from an alum who showed early demos at the Entertainment Technology Center. It was so exciting to see that Sony was fully embracing VR in a way that wasn’t happening on any other console.

I think our first PS VR experience was with Rush of Blood and RIGS: Mechanized Combat League. Rush of Blood was and is one of the best horror experiences in VR to date, that game is awesome. I want more! RIGS: MCL was a ton of fun, it showed us the potential of true multiplayer in VR and inspired us in many ways. It was truly before its time and was one of the better MP VR shooters out there.

I remember playing Thumper at a friend’s place who showed me PS VR for the first time. I was impressed how such a simple switch to its VR mode completely changed the game experience for me. It was still the same game but somehow it felt like a totally different world which was more epic than its 2D counterpart. 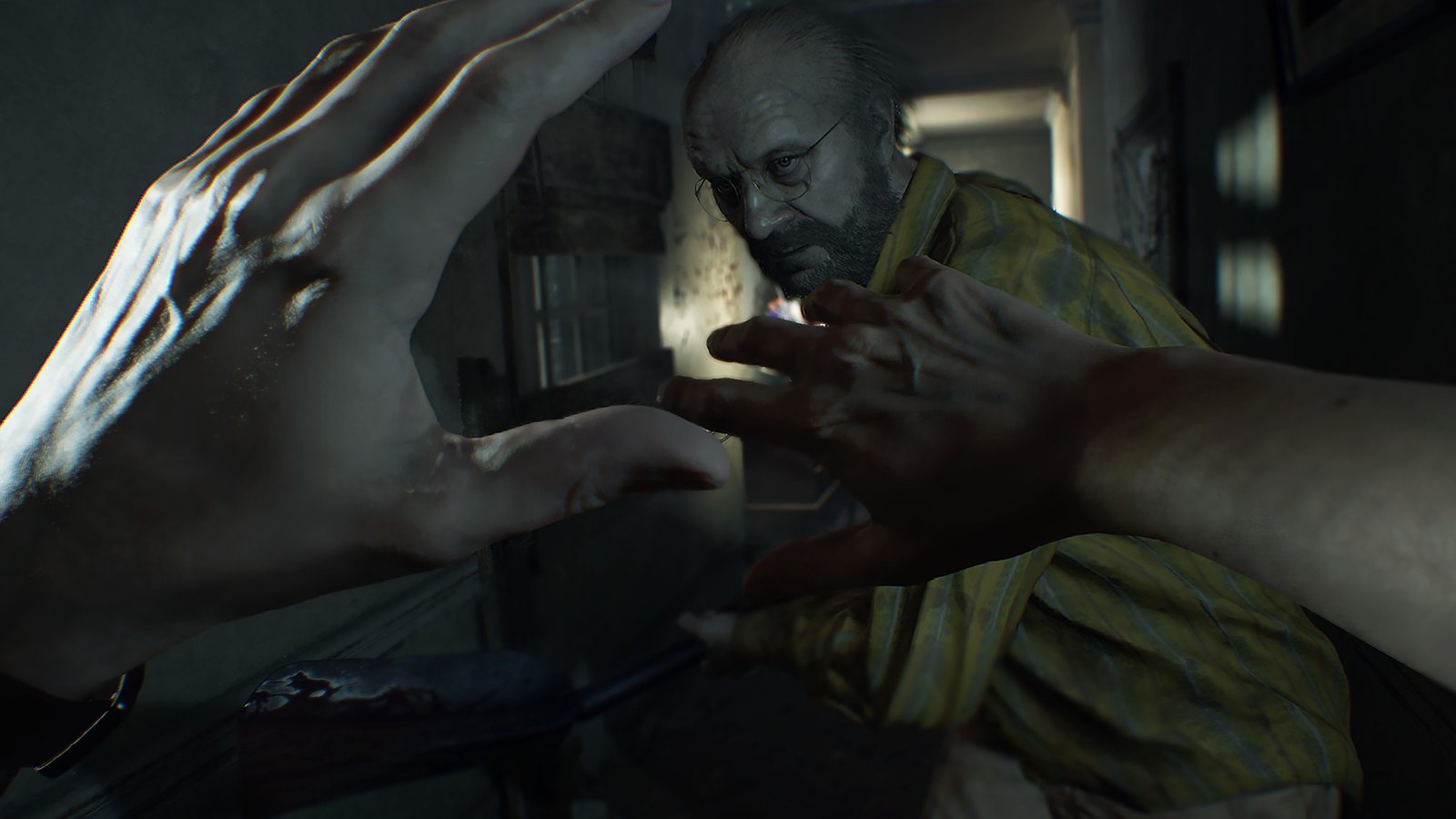 How has PS VR changed what you thought was possible for console gaming?

I think the biggest shift was realizing that players were no longer watching things on a screen, but that they could enter the virtual environment and truly be within the game world. Even if you’re offering the player the same base gameplay experience, it was fascinating to see just how different that same gameplay experience could be from a regular TV environment to a VR environment.

PSVR has given a whole new way of playing that wasn’t quite the same beforehand.  Being able to move your hands around to aim a weapon, lift a hatch, drag yourself up a mountain, or throw a donut into a neighboring cubicle felt totally unique compared to regular gameplay.  The immersion PS VR offers through the quality of the displays is the ultimate way to experience a game world – sitting at the dinner table of the main house in Resident Evil 7 on PS VR is truly unforgettable!

PS VR really brought us an opportunity to simplify the experience to a very instinctive level. The best example I can think of is the entire removal of camera control. By becoming the camera, you no longer have to learn camera manipulation and can focus on the action. A simple glance left and right, leaning to see behind a wall, all these are every-action we do without thinking but are actually quite hard to incorporate in traditional games. With PS VR, we got all of these virtually for free (pun intended) and that helped us make a more accessible game!

PS VR is very comfortable to use for extended periods of time which opens up all sorts of design possibilities for different types of games. It led us to make three different distinct experiences for the platform: Wayward Sky – a third person diorama action adventure, Dino Frontier – a western town simulation game with dinosaurs, and Falcon Age – a first person action game with a pet falcon. All three of these took advantage of the PS VR hardware and we had to rethink each genre approach during development to fully embrace what was possible with the hardware.

I think PS VR is just the tip of the iceberg when it comes to where VR will go. I truly believe that one day, VR will be the preferred way to play all games. PS VR is the only real dedicated gaming VR platform. It still has more quality games than any other VR platform around today. With so many high quality titles it really is the gateway to AAA VR Gaming. It showed us just how effective VR can be and the potential direction of VR gaming in the future.

It is like a night and day difference – PS VR with Move controllers unlocks so many options which were not possible to experience on a 2D screen with just a normal controller. 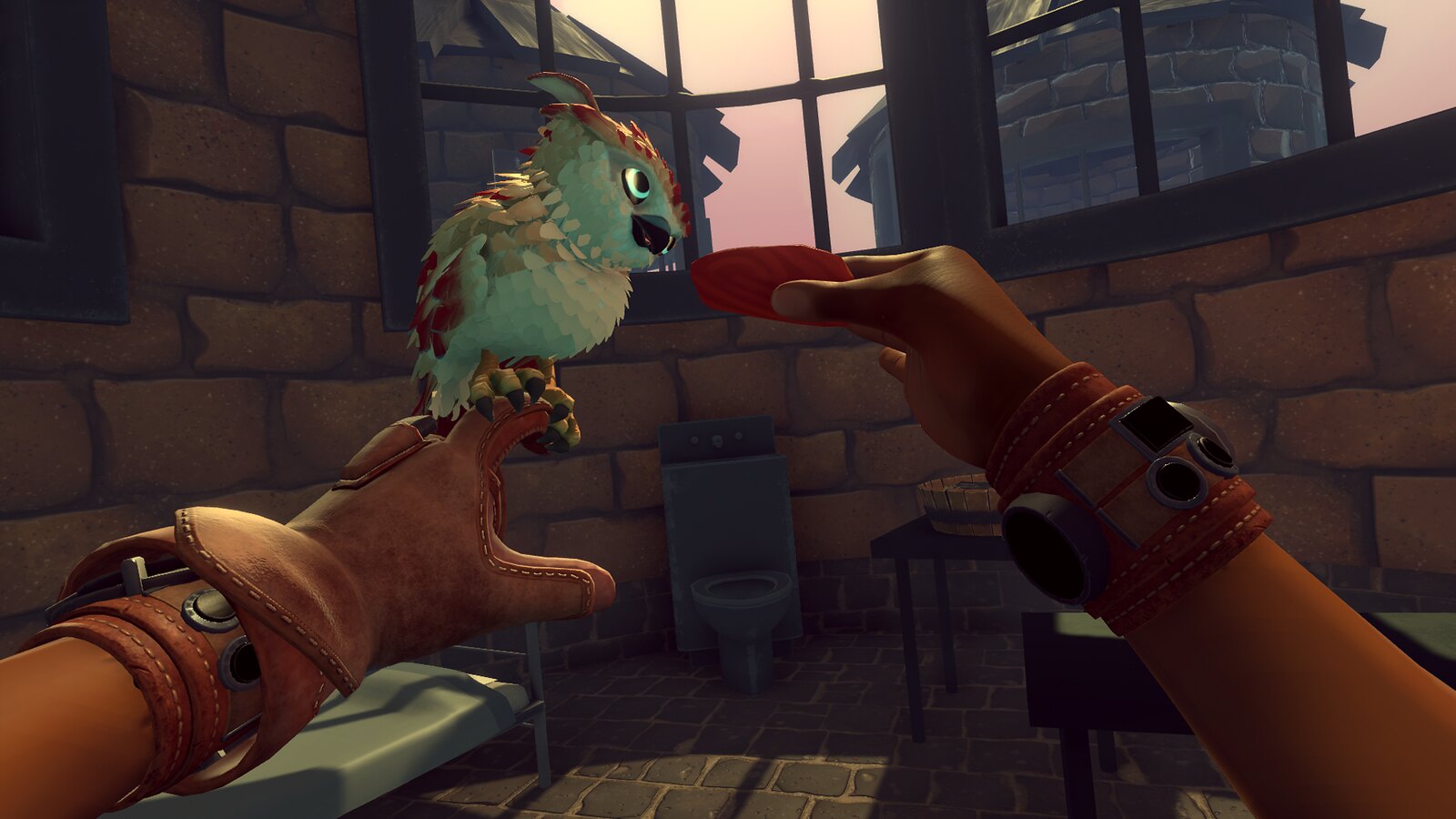 What should people know about when developing games for PS VR? Any key learnings?

We learned early to try things out on the hardware as soon as possible even if it’s the silliest idea. What you think will happen vs what actually happens when you tried it out on PS VR differed greatly.  While making Falcon Age, we worked with a real-life falconer in Washington to make sure we were accurate in how we treated falconry in the game. She gave us some pointers on how the falcon should behave after a hunt, how it spreads its wings and protects a kill, and how falcons react to water.  There was a scary part during our time with the falconer. She warned us to not look directly at the falcon’s eyes as it would see us as a threat! It’s hard not to stare at a beautiful bird like that but we managed to do it and no developers were hurt during production.

[W]e worked hard on Kitchen,  which was a PS VR prototype that would be a stepping stone for eventually incorporating VR into Resident Evil 7 biohazard. It was our first time venturing into that kind of game scape, so we did a lot of internal testing. I still remember coworkers participating in the play tests would jump out of their seats or slip out of their chairs from fright and would laughingly and angrily remark that the experience was “too scary.” We released a snippet of that footage back in the day, so I’m sure it’d be a good chuckle for anyone who is interested in checking it out.

When developing our horror game, The Persistence for PS VR, we would often have the headset on whilst developing features, being totally lost in the nitty-gritty of the work.  But the game also supports a companion app where you change things in the world.  One member of the team (who shall remain nameless!) used to love dropping enemies in behind people who were working away on their features.  Suddenly they would get attacked from nowhere by a raging mutant and you’d hear them screaming across the studio!

Halfway through the development of Firewall, we realised all our playtests were so much fun because we (the team) all knew each other and everyone naturally communicated. We realized if people were playing [with] strangers and were shy, it could really limit the experience and we were worried. But the funny thing about PS VR is that it is so immersive and the mic is already a part of it, (most) people just naturally become social. Not only did the game thrive with the communication but it also formed so many relationships, people from all over the world have come together, some have been married, some even had children together.  The thing we were worried about actually is one of the best features about the game, it’s incredibly social and friendly.

*PS Plus is subject to a recurring subscription fee taken automatically until cancellation. Full terms: play.st/PSPlusTerms.