When I played my first Action RPG 20 years ago, I never imagined this ubiquitous mouse and keyboard experience would someday be translated to a controller and that I’d be playing our own game, Grim Dawn, on a television screen from the comfort of a couch.

It’s such a natural fit, too, that it’s a wonder ARPGs have only started transitioning to consoles in recent years. When we first set out to port Grim Dawn to the Xbox, we were not sure whether we’d have to make adjustments to monsters or mechanics, but it turned out that the game feels great to play with a controller. The experience Xbox players will soon be getting is exactly the same as the one we’ve meticulously refined on PC. No concessions, nothing cut or changed.

We are absolutely thrilled for this next era in Grim Dawn’s history and the new audience that’s about to explore the darkest corners of its vast, immersive world. With seven story acts and years of free updates included in the Definitive Edition, there’s a lot to discover for a new player.

My favorite addition to this day is probably our roguelike dungeons. They offer just the right amount of tension and rewards, especially when you try to clear them at lower levels. I could never stomach playing on hardcore mode, where a single death means your character is finished. I salute those who do! Our roguelike dungeons offer a taste of such a daring commitment by requiring no deaths on each attempt, and that’s the perfect balance of risk and reward for me.

These dungeons are just the tip of the endgame iceberg though. Between the Crucible’s wave attack mode, the Shattered Realm’s infinite progression, and our super-bosses, everybody is bound to find enjoyable goals to strive towards. It’s a staggering amount of content.

Grim Dawn is teeming with lore and secrets for players to discover. Meaningful quest choices with consequences and conflicting factions to join means that your characters can actually play their part in shaping the world around them.

To this day, players are dissecting the game’s lore and forming their own theories on events of the past and what they mean for the future of Grim Dawn. Reading those theories, even some of the wildly inaccurate ones, has been one of the most enjoyable parts of my job while developing Grim Dawn. At the same time, it’s really satisfying to see players put the puzzle pieces together and figure out exactly what happened.

As we near the release of the console version of Grim Dawn, we are excited to have new voices join the community, offer their own insights and invent their own builds using the 36 class combinations and thousands of items.

If you’ll be joining us for the first time on console, we can’t wait for you to get started on your adventure today! 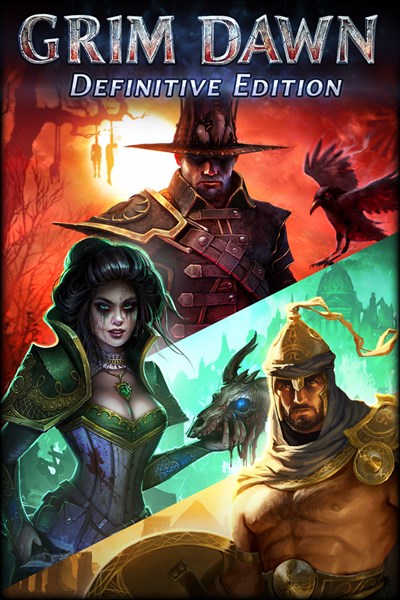 ☆☆☆☆☆ 25
★★★★★
Enter a dark fantasy world where humanity is fighting for survival in this epic bundle that combines Grim Dawn and three sprawling expansions. Develop complex characters, collect hundreds of exotic unique items and make decisions that affect the characters you meet with permanent consequences as you explore a vast world filled with countless foes and massive dungeons. Ally yourself with numerous factions and become the bane of your enemies to face off against their most powerful agents in this epic ARPG adventure. Grim Dawn: Definitive Edition contains the base Grim Dawn experience and two sprawling expansion packs to enhance your adventures with new environments, enemies, and quests, hundreds of additional unique items, and three new character classes.