Immortals Fenyx Rising: A New God is available now on Xbox One and Xbox Series X|S, following Fenyx as they undertake a series of challenges and trials to earn a place in the Pantheon of the gods. In order to prove themselves worthy, Fenyx will explore a new open area, Olympos Palace, and delve into new puzzle-filled vaults designed by the gods themselves.

Additionally, players who haven’t yet had a chance to try Immortals Fenyx Rising can get a taste of its climbing, gliding, and aerial melee combat with the free demo, which is now available on Xbox platforms. Featuring exclusive content not seen in the main game, it’s a chance to experience Fenyx’s range of abilities with a short, self-contained quest to uncover the Secret of the Cyclops.

Immortals Fenyx Rising: A New God features elaborate new vaults that – in addition to looking much sunnier than the main campaign’s Tartaros Vaults – feature all-new puzzle elements, like Tesla coils and interconnected portals, along with plenty of tricky navigation and physics challenges. As players complete the vaults, they’ll be encouraged by Ares, Athena, Aphrodite, and Hephaistos, who will gradually reward Fenyx with four new ability upgrades. These enable Fenyx to do things like smash through otherwise impassable barriers, or switch places with a statue-like clone, which become increasingly vital as players tackle the later, more complex vaults. And, of course, there are plenty of opportunities to cleave through hordes of tough-as-nails monsters with Fenyx’s fully powered-up combat capabilities and a new, god-appropriate gear set.

Immortals Fenyx Rising: A New God is now available as part of the Season Pass for Immortals Fenyx Rising, or as a separate purchase (and while it’s playable without having finished Immortals Fenyx Rising, story spoilers make it highly advisable that you do). Fenyx’s ascension to Olympos is also just the beginning of what’s in store, with future DLC adventures letting players explore Chinese mythology in Myths of the Eastern Realm, or beat up monsters as Fenyx’s new champion Ash in The Lost Gods.

For now, Immortals Fenyx Rising: A New God lets players tackle huge, perilous challenges that elevate the game’s dungeon design to new (literal) heights. Do you have what it takes to become a god? Dive into the new DLC– or start with the free demo – and find out. 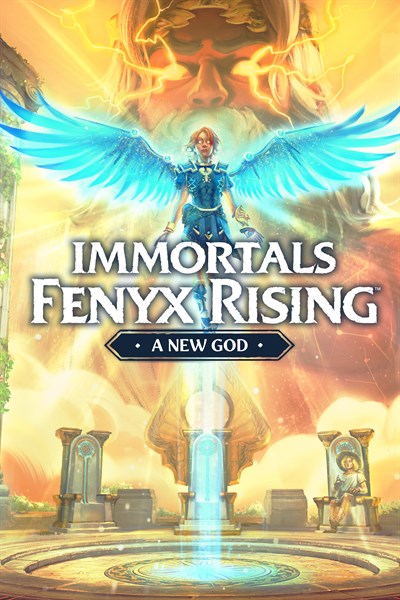 ☆☆☆☆☆ 4
★★★★★
Expand your Immortals Fenyx Rising™ adventure with this first DLC for more epic adventures and puzzles!
In A New God, play as Fenyx to overcome the trials of the gods of Olympos. In these trials, Fenyx hones her godly powers and finds ways to become even stronger as they attempt to earn a place among the inner circle of the Pantheon.