In Orcs Must Die! 3, we’ve introduced a new type of level, which we call War Scenarios. To better understand what these are, we should start with how the idea of War Scenarios came about. In a previous Orcs Must Die! title, we had a scenario called The Wall. It looked amazing, and it was basically Orcs Must Die!’s version of the invasion of Normandy beach in WWII. However, it was missing two things: the ability for you to place traps on the battlefield outside the fortress and us giving you way more orcs to kill. This is where War Scenarios were born, at least, on paper anyway.

As a concept, War Scenarios sound easy, but in practice having hundreds of high-quality art assets on screen, each with their own AI, is challenging. It all started with a test level that we have since polished and can be played in Orcs Must Die! 3 – The Lava Pits.

We knew we wanted the first War Scenario to have one enemy entrance, and once orcs started pouring into the level, we wanted you to feel like it might not stop. Intimidation was the goal. However, if we were going to intimidate you, we knew we had to provide you the tools that you needed to defend the rift. This forced us to come up with a whole new set of traps that would not only be useful on the battlefield but were awesome enough to make you feel like you could deal with any size army that we threw at you. We made these tools powerful, and large, and we called them War Machines.

The Mega Boom Barrel Launcher was our first War Machine. For those of you that played the original Orcs Must Die!, you might remember we did have mountable ballista, but they did not fully realize our goals. I think the Mega Boom Barrel Launcher puts that notion to bed. Not only is it one of the biggest traps in the game but it has a range that reaches across the entire battlefield. When the boom barrels land, they have a giant explosion radius that sends most enemies flying through the air. Early on, we were concerned with the trap being too powerful. Ultimately, we decided that since it is mountable, you have to decide how long to stay mounted versus when to get out to stop enemies that pass by.

As the design department entertained many ideas for War Machines, we had started a parallel discussion about creating more organic (i.e. non-mechanical) traps as well. Naturally, organic traps were not just something we wanted to play with indoors. War Machines would also benefit from sharing this concept and one of the ideas that we came up with was the Tornado in a Box. In early design discussions for this trap, it almost sounded impossible. We wanted the trap to have a small placement footprint while at the same time having it generate a huge tornado. We wanted the tornado to move about the battlefield picking up and throwing almost everything in its path. Tornado in a Box was to have everything that an Orcs Must Die! fan loves in a trap -physics, crowd control, and damage all rolled in to one breathtaking event. These goals were ambitious, but I think the programming and art departments really delivered.

When playing War Scenarios, you will not only place mechanical and organic traps on the battlefield. You will also place AI characters that we have named War Guardians. The intention was to feel like you were placing other heroes on the battlefield to fight side by side with you. The War Guardians are not only impressive looking, but they have their own weapons, primary attacks, and custom secondary abilities. The Knight charges towards the orc army with his huge broadsword to fight hand to hand, occasionally raining down magic lightning swords in front of him. War Guardians have a lot of health and can never die. They merely retreat to their base, take a knee, and magically heal over time allowing them to reenter the battle at full health. I don’t think it is too much of a spoiler to say that War Guardian weapons are also available for you to use, giving you the same custom secondary ability.

These are just three of the over 10 War Machines you can use in War Scenarios. You will want to master them all if you want to take on the massive armies in Orcs Must Die! 3 – available now. 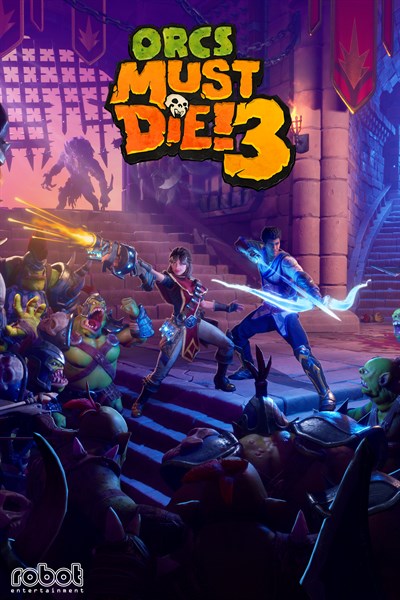 ☆☆☆☆☆ 4
★★★★★
Pre-order and receive bonus content at launch:
• Overlord skin for Egan
• Overlord skin for Kelsey
• Overlord blade staff Orcs Must Die! 3 ushers orc-slaying mayhem to a previously unimaginable scale. Solo or with a friend by your side, arm yourself with a massive arsenal of traps and weapons. Slice, burn, toss and zap hordes of repugnant orcs in this long-awaited successor to the award-winning series. New to the series, War Scenarios pit players against the largest orc armies ever assembled. Mountable War Machines give players the essential firepower to heave, stab, carbonize, and disarticulate the abominable intruders. More of Everything – Orcs Must Die! 3 is everything fans loved about the first two games and more. More orcs, more traps, more weapons, more upgrades and even better looking. It’s cranked up to at least eleven. New Story – Play through a brand new story set more than 20 years after Orcs Must Die! 2, where the War Mage and Sorceress have rebuilt the order and trained new young apprentices. War Scenarios – All new War Scenarios deliver on the promise of massive scale first set out in Orcs Must Die! Confront overwhelming armies of orcs outside on the battlefields surrounding the castles. Thin out waves of orcs hundreds strong before they breach the walls and crash your rift. War Machines – You’re going to need new weapons of death and destruction to handle these hordes. War Machines are traps on an oversized scale. Lay down your mega flip trap and launch dozens of ragdolling orcs. Mount your mega boom barrel launcher and unleash pyrotechnic glory. It Never Stops – The legions of orcs keep coming long after the story is completed. Etch your name into the orc-slaying hall of fame through Weekly Challenges or see how long you can survive in Endless Mode. Take Drastic Steps – Orcs Must Die! 3 comes with the Drastic Steps campaign and content for free, including terrifying flying enemies, heroic war guardians and of course more tools for orc destruction! Scramble to Survive – The new Scramble Mode pits you against vile orcs who evolve with increasingly difficult and sinister tricks up their chunky sleeves. But each level you survive, you collect your own modifiers to fight back with!
[This article originally appeared on Xbox Wire]