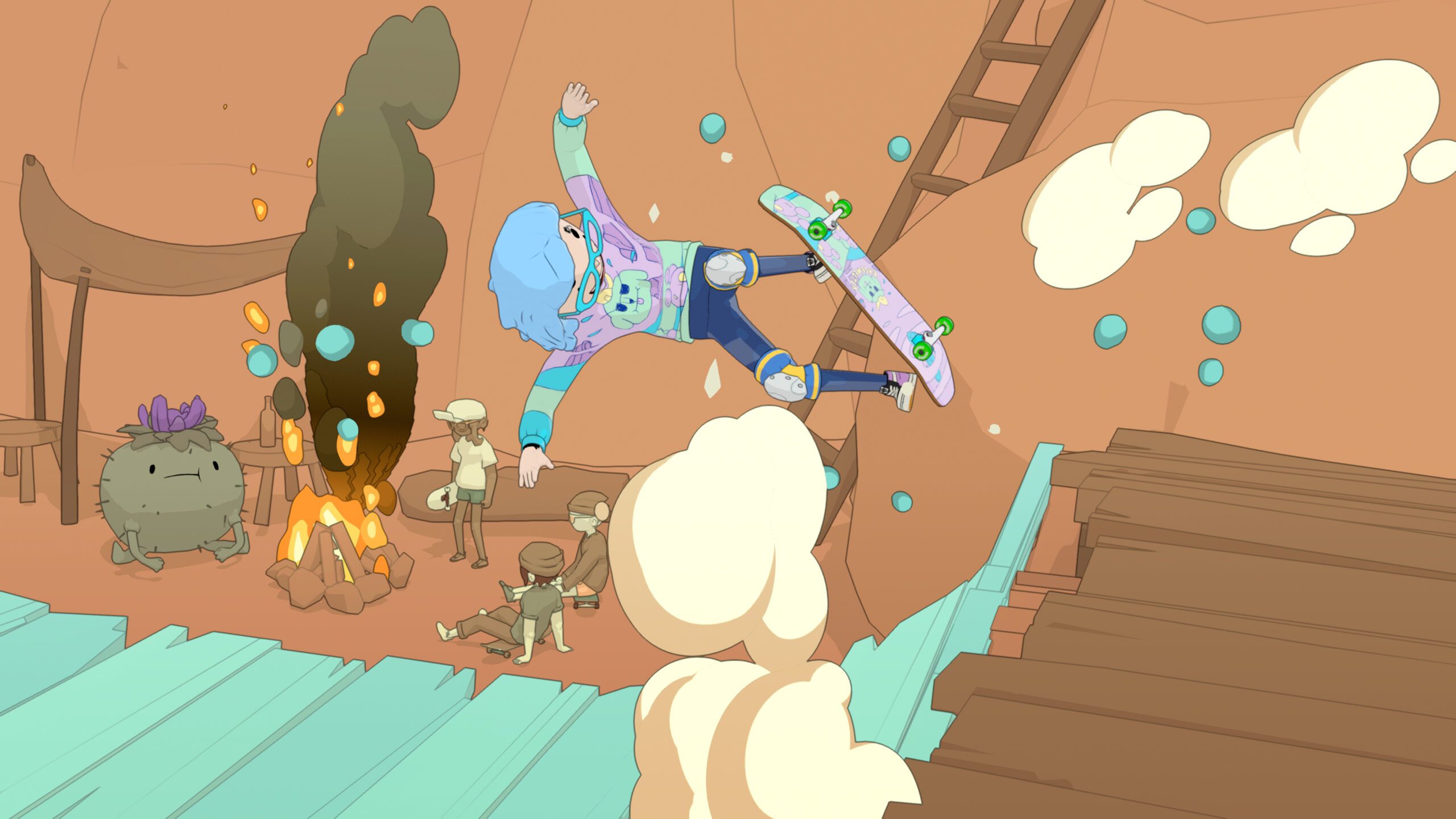 OlliOlli has been a hit with players ever since it launched on PS3, PS4, and PS Vita way back in 2014. We followed it up in 2015 with the release of OlliOlli2 on PS4 and PS Vita. And now, in 2021, we’re bringing a much anticipated wholly new take with OlliOlli World to PS4 and PS5.

We want to really bring you, the players, into OlliOlli World. We’ve kept the super-smooth gameplay and gnarly tricks from previous games – but we’ve also included a whole bunch of awesome new stuff for you to explore. We’ve got a colourful and zany cast of NPCs for you to meet and hundreds of customization items to unlock as you beat high scores, complete challenges, and progress through the game across multiple routes that allow you to truly carve your own path through each of our lovingly designed levels and unique biomes.

A biome full of perilous hills to skate down.

On PS5, you’ll be able to appreciate all the epic and super wacky level details in stunning 4K. And when you’re absolutely crushing a level, chaining trick after trick at the highest possible speed down the biggest possible hill? No stress, because you’ll be doing it at 120 FPS (4K and 120fps with compatible devices).

Burntrock is a new biome we wanted to reveal today and just one of five distinct biomes that make up Radlandia. It’s a desertscape full of camping cactus-folk, giant ancient fossils, and the legendary Burntrock Fest. Take a closer look at the locale below:

Even though it’s a desert, it’s not barren but brimming with character, and that was something that felt really important to us when we were developing our game – we want it to be a living, breathing world for players to explore. The levels in Burntrock are designed to teach you new techniques, like grabs, whilst simultaneously providing you a chance to polish up the skills you’ve developed through the game so far. And that means… well, it means you’re going to slam!

But the work that the art and design teams have put into Burntrock, makes that its own kind of reward – when you slam, you get a moment to breathe and enjoy the desertscape around you and pick up on all the details that you miss if you just skate on by. So, keep your eyes peeled – there are rumours of aliens in the area, and you never know what you might see…

Smash and grab your way to Gnarvana.

Whether you’re new to OlliOlli World or you’re an old hand wanting to see what’s new, here’s your guide to what to expect when the game launches later this year:

Customize your skateboard in OlliOlli World.