The idea of space travel brings with it an endless supply of exciting possibilities, and while I would like to think there’d be a place out there for me to really shine amongst the stars, the thought of having my ship blown to pieces and my body sucked out into the vast, empty vacuum of space is more than enough for me to stay firmly planted on Earth. Luckily, ROCKFISH GAMES found a way to deliver all the excitement of being a galactic fighter pilot while avoiding almost all of the risk (carpal tunnel probably affects pilots too). Enter EVERSPACE 2, an extremely pretty single-player looter shooter that combines exciting dogfights with interesting puzzle mechanics, all set amongst the stunningly beautiful final frontier.

EVERSPACE 2‘s story starts with an ill-fated scavenger operation on the outskirts of a supposedly dead mining outpost. Players take on the role of Adam, a rogue government clone-turned-scav whose skills as a fighter pilot earned him a place in his current gang. After a devastating ambush that left most of his crew dead, Adam and his fatally wounded pal are rescued by a mystery man and set up shop in an abandoned asteroid base. What follows are a series of main missions wherein Adam must secure special medical equipment for his buddy while navigating his new relationship with their savior. Though I only got a brief taste of the main missions available during Early Access, the developers promise up to 30+ hours of story content with the official release.

Alongside the main story was a healthy splattering of sidequests, jobs, and random discoveries that ran the gamut between simple search-and-destroy missions, treasure hunting puzzles, and saving stranded pilots. Distress beacons, broken ships, and mining colonies litter the vast expanse of space as you cruise at hyperspeed from one planetary system to another. As with the storyline, the developers promise to include much more side content to keep players busy as they race across each sector. 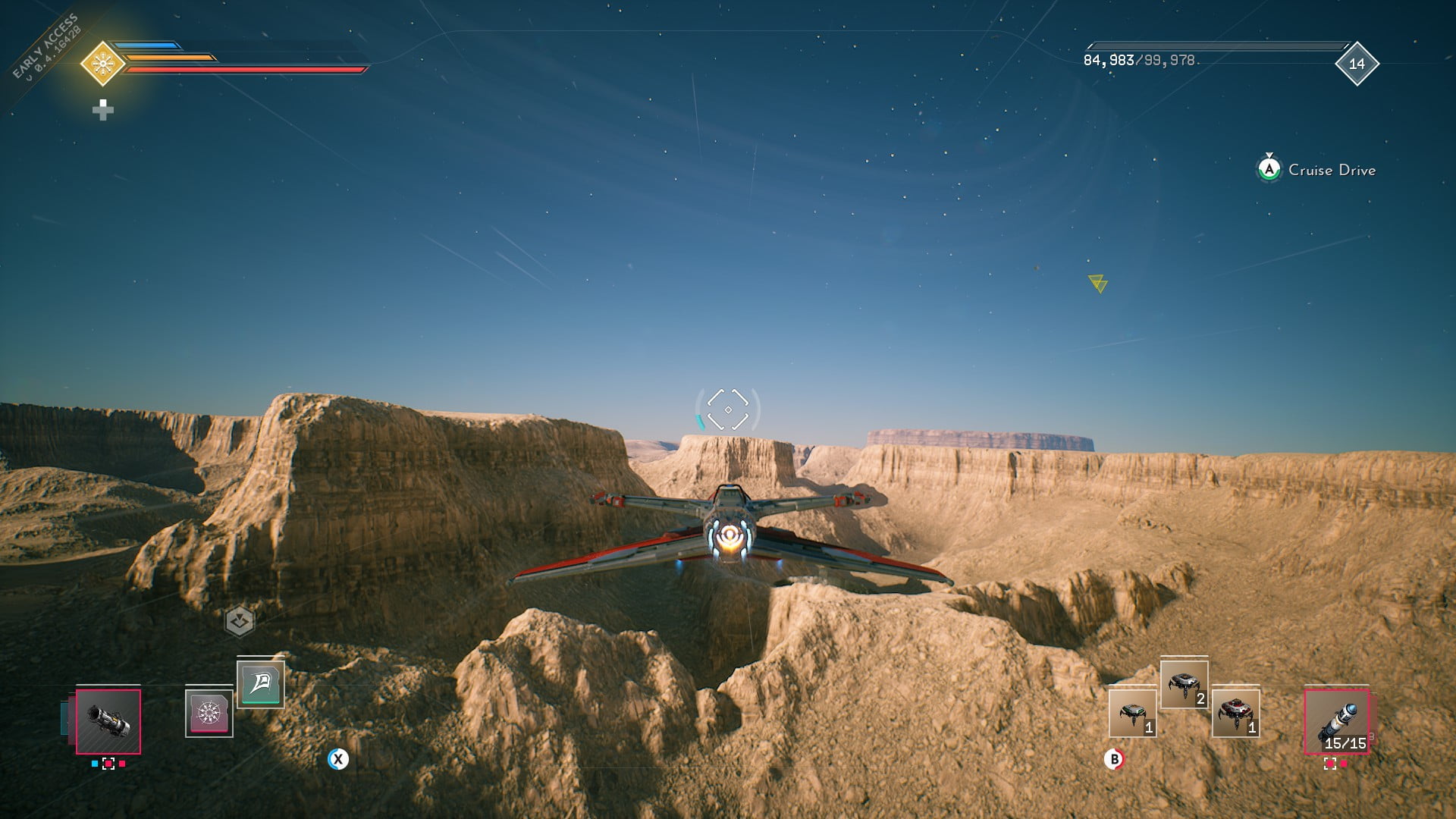 When it comes to actually navigating the stars, EVERSPACE 2 carves out a nice little spot somewhere between the savant-level Elite Dangerous and drunk-driving Rebel Galaxy. While there are fewer technical flight controls, players still need to navigate the 3-dimensional plane and finetune their control over thrust and pitch, providing just enough challenge in tight spaces while still allowing for easy flying outside of combat (the three layers of shields, armor, and health certainly help if you’re prone to flying into walls). The amount of space/landscape variety provides plenty of opportunities for the casual flyer and podracer alike, with vast swathes of open space and miles of intricate asteroid tunnels to scratch every itch. The promised addition of solar storms and black holes are also bound to spice up the flight pattern a bit. 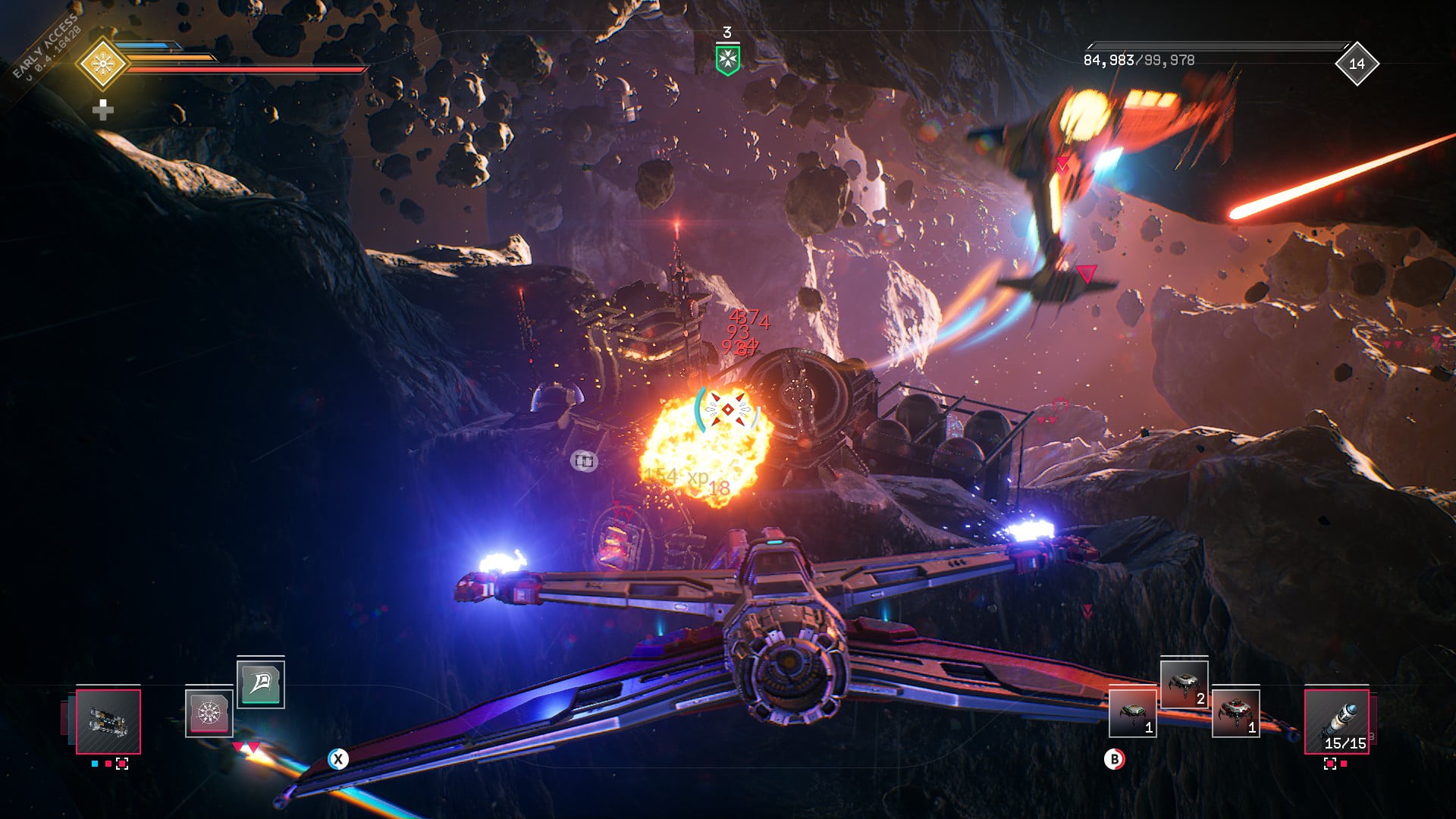 Combat in EVERSPACE 2 typically came in two flavors: Exciting one-on-one skirmishes a la The Red Baron, or massively unbalanced ass-whoopings more akin to the Battle of Scarif in Rogue One. The former were only annoying for the first half of the available storyline, when your ship is about as sturdy as a cereal box and your lasers about as annoying as a cool breeze. But once you crank out a few levels and equip a scarier arsenal, the dogpile of drones and enemy fighters becomes a bit more manageable and slightly more prosaic.

While I hate myself for describing a high-stakes space battle as prosaic, EVERSPACE 2’s attempt to enforce strategic gameplay falls a bit flat when you’re in the thick of it. Sure, it would be easier to arrange your various primary weapons in such a way as to make slicing through their kinetic shields and hull armor easier, but the amount of effort that goes into said planning far outweighs the benefit when storming the castle guns blazing is so much faster and far less tiresome. Every battle I entered was quickly reconciled by a simple combination of using my EMP perk, blasting until my primary weapons needed to recharge, and launching missiles or mines at a rate that would make Richard Gatling blush. The only time this strategy didn’t work was during the available boss fight, where my main attack was reduced to tactically flinging garbage at the enemy until they told me to stop. 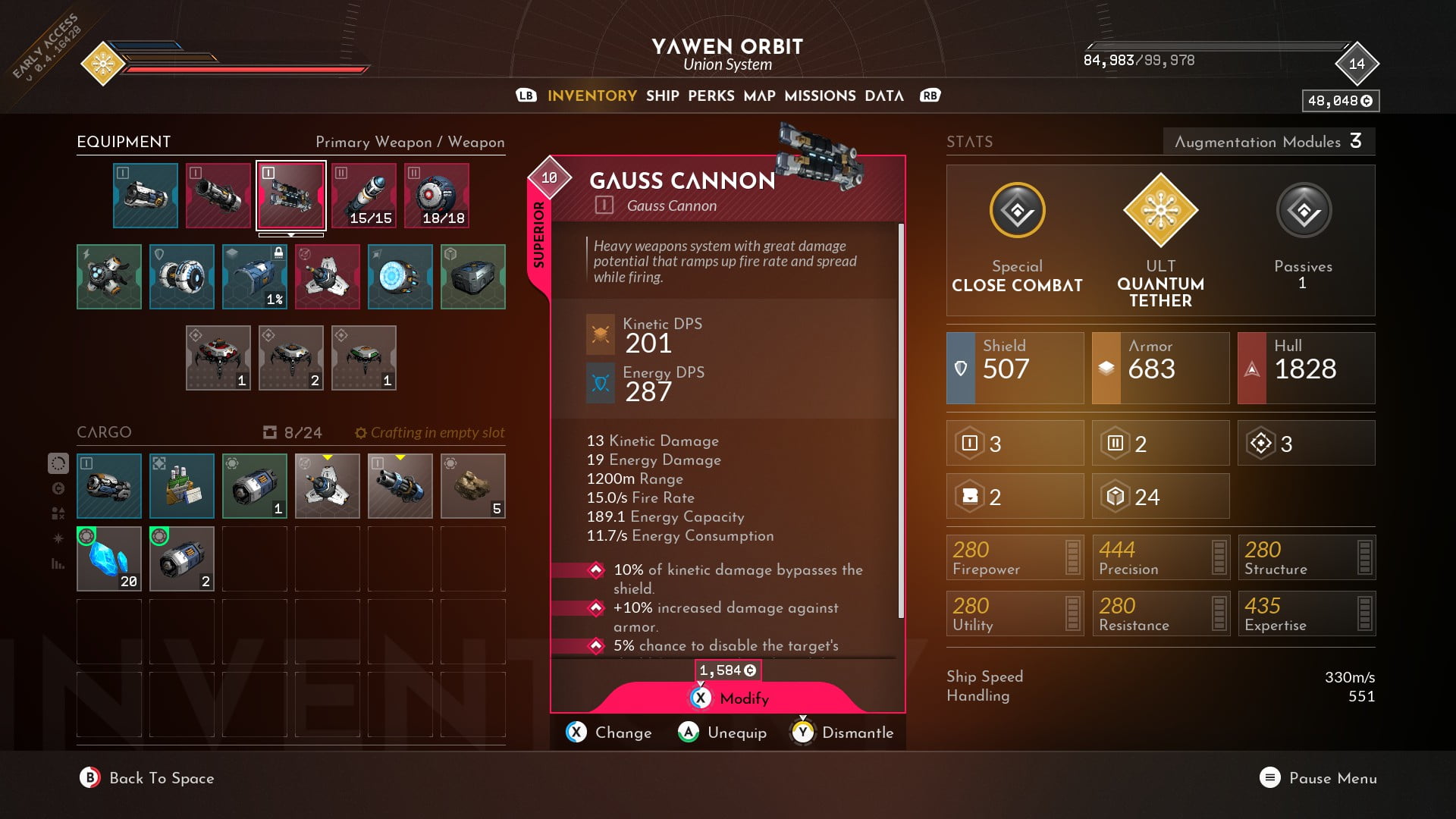 Where the combat may boil down to its simplest elements, the amount of ship and perk customization available is actually pretty impressive. Levelling up increases your general damage and health, but the real customization comes from looting or purchasing upgrades to the hull, sensory array, boosters, storage compartments, and weaponry. While the developers plan to add a considerable amount of items and gear with the official release, there was already plenty to keep me busy when it came down to obsessively comparing and equipping loot. In addition to actual upgrades and gear, players can also collect and trade commodities such as liquor, minerals, and the all-important ramen as they loot derelict ships or abandoned mines.

On par with the multitudinous gear and weapon selection is the advanced companion and perk system. Adam himself comes with a series of perk tiers that unlock every ten levels, and each companion he acquires throughout the main story offer their own set of special equippable abilities, ranging from EMP blasts to health orb generation. These abilities in turn can be improved and upgraded using harvested materials, further increasing the amount of customization available to the player. 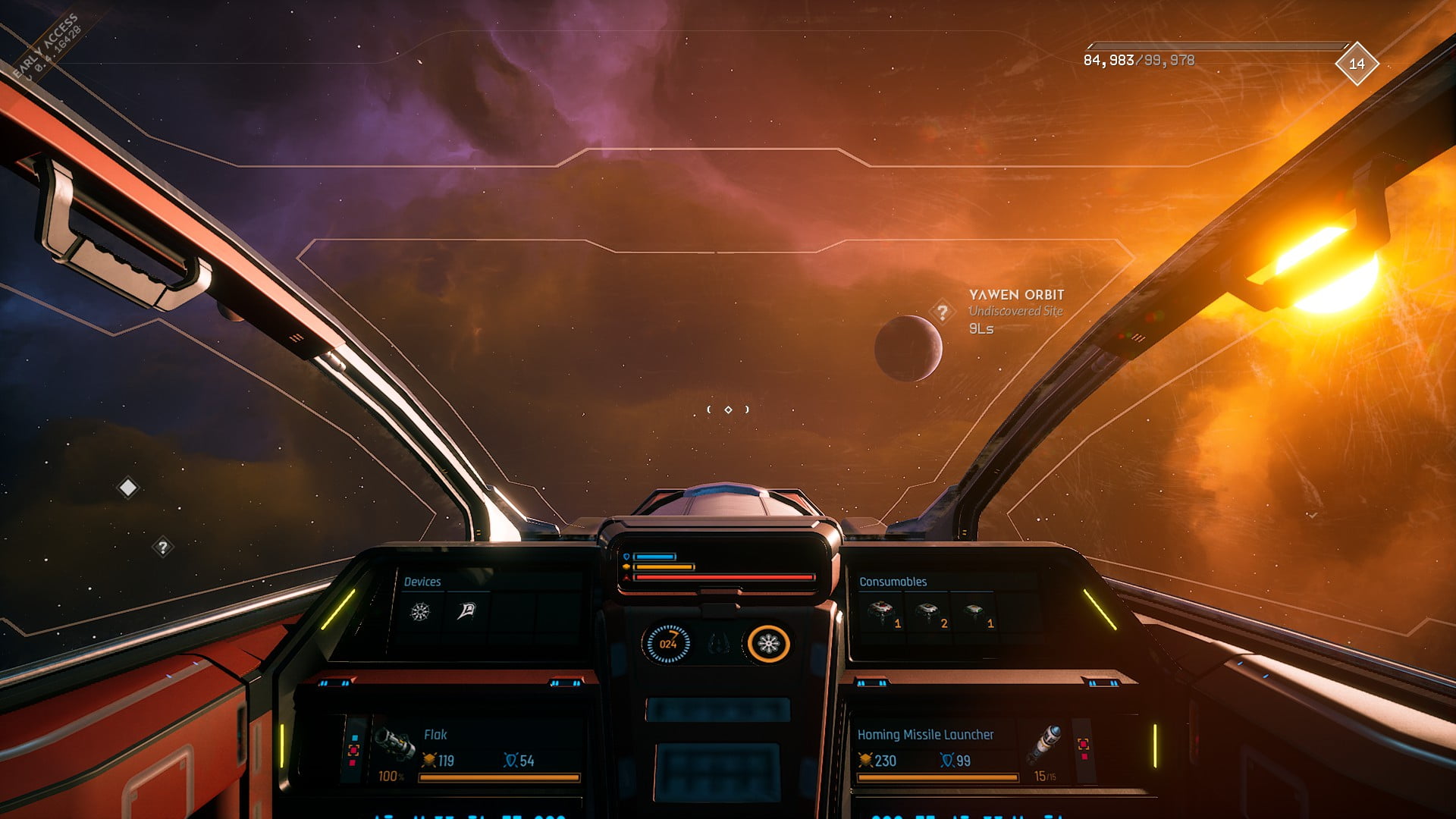 In terms of polish, EVERSPACE 2 is absolutely stunning in every way. The glare from a nearby sun reflecting off the plates of armor and gauss cannons across the hull of my ship felt as real as any drive I’ve ever taken, and the vivid color schemes of far-off nebulas, nearby planetoids, and massive military convoys meshed perfectly with the surroundings. I spent plenty of time just cruising the vast nothingness in cockpit view, admiring not only the functional array of sensors spread out before me, but also the beautiful detail of the universe ROCKFISH GAMES built. The sound effects are likewise fitting, but to a less noticeable degree, and the soundtrack is similarly passable (though it doesn’t hold a candle to Rebel Galaxy).

In summary, EVERSPACE 2 is an extremely fun game that feels far too polished to be in Early Access. While the combat could use some variation, the amount of changes the developers have in mind promise to provide an extra layer of complexity to spice things up. The tight controls, complex customizations, and beautiful aesthetics will keep players busy for hours, and I personally cannot wait to see where this game goes with the official launch.