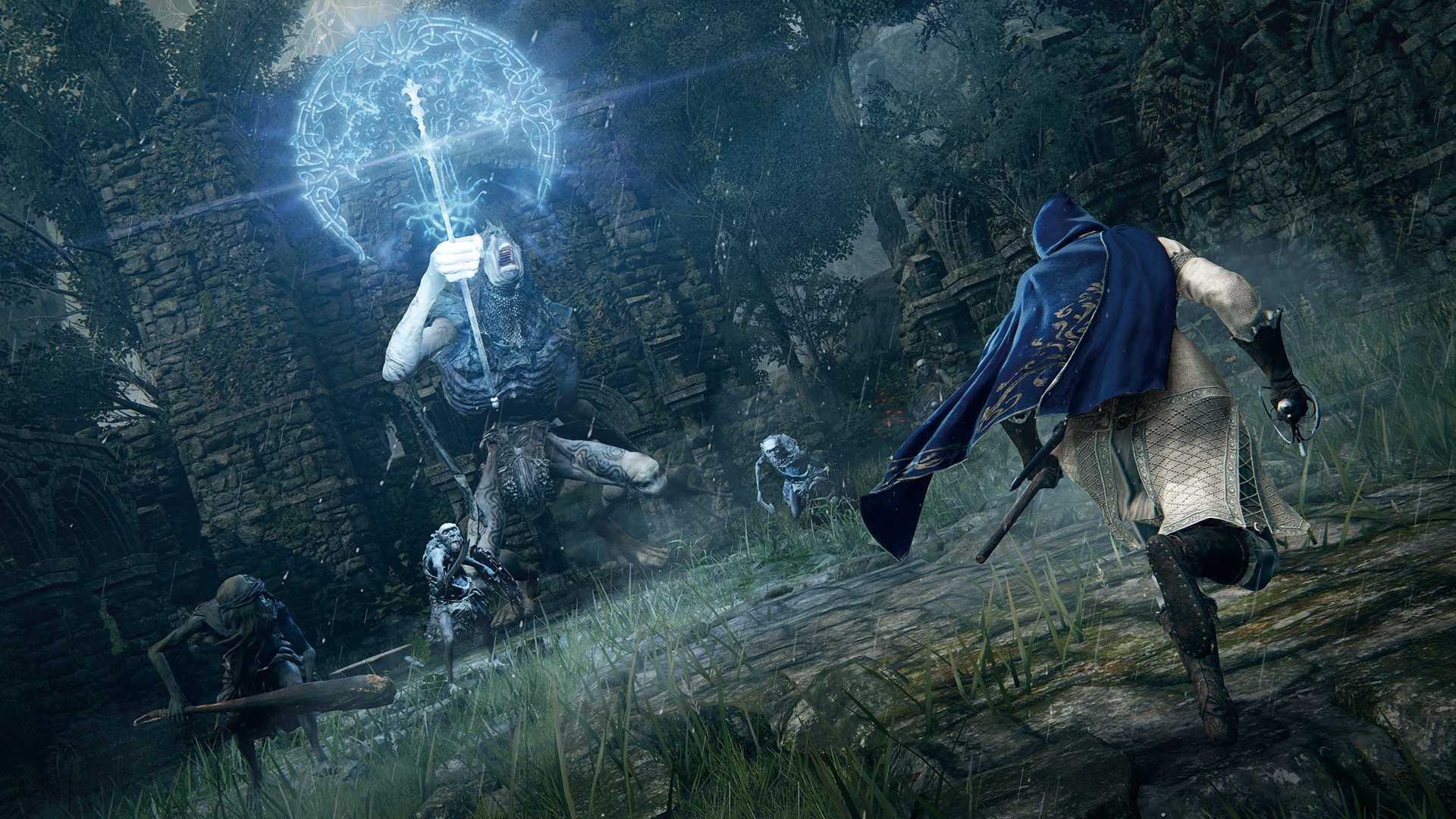 Elden Ring’s release draws near and everyone knows it will demand players’ best just like FromSoftware’s past Souls-like ventures. Though the battleground is now the realm of Lands Between, your past experiences aren’t completely irrelevant, save for a few new features and all-new hurdles to leap over. To help get you started, we’ve prepared some tips for anyone looking to armor up and take on one of the largest FromSoftware adventures to date.

One of the primary methods of travel in Elden Ring is aboard your mount, Torrent. This Spirit Steed allows you to travel crazy distances thanks to its ability to double jump, awesome speed, and ability to add an extra combat option when it comes to battle. Torrent makes for a powerful tool in combat, especially since you’ll receive the same number of experience points whether mounted or not.

When fighting in open areas against larger and slower enemies, mount Torrent by using the Spectral Steed Whistle. Its extra speed and ability to stay in constant motion while in battle make it the perfect tool to land quick attacks and fall back, especially when fighting giants, shielded enemies, and mounted foes.

However, Torrent is also a great ally against standard hordes thanks in part to its fast vertical attack capabilities. By pressing L3  you can leap from your steed and perform  a highly advantageous jumping slash attack. You won’t want to endure too many attacks while riding the specter though, as enough damage will lead to broken posture and you risk taking a good bit of damage while recovering from the fall—not to mention you’ll have to use a flask or rest at a Site of Grace to bring it back.

Much like in past Souls games you’ll be your own guide when traveling the road of the Tarnished. However, there are hints that show you’re nearing a site of interest or progression. Bosses, powerful enemies, large hordes of foes, and of course, Stakes of Marika are all highlighted to lead you in the right direction.

Sites of Grace are the bonfires of Elden Ring and can help you find your way. These places of rest emanate a faint golden trail that you can follow to the next big objective or location to progress the plot. Be sure to camp out at the Site of Grace northwest of the starting area to meet Melina, the maiden who will help you start leveling up using collected Runes (xp resource similar to Souls).

When venturing into a new area, your map will be a blank slate until you visit a plaque located somewhere within. Locate this small icon on the map, drop a marker, and find this plaque to splash detail and color onto your map. Hidden caves, fortresses, and other points of interest will become easier to find and explore.

Stealth can be key

As in past FromSoftware titles in this vein, you will often find yourself outnumbered in Elden Ring. The Lands Between are occupied by many different beings and many want nothing but your demise. Some of these factions have bases that you’ll encounter and need to take out for loot or experience. In moments like this, it is key to use your surroundings and find the safest way possible to take on these hordes of foes.

Sometimes that means delving into a mine, sneaking up on workers picking away at resource veins, and backstabbing them one by one. Other times that means sneaking behind a towering giant guarding a castle to pilfer the rewards inside without a fight. There are many ways to go about reaching your goals and you’re in control of it all.

While traversing the world you’ll encounter various boss enemies in random areas, sometimes dwelling in caves or roaming the fields on horseback.You can avoid these battles if you aren’t quite ready, but sometimes the fight finds you. One case is the Flying Dragon Agheel who comes soaring down from the sky, which you may not even realize until it’s too late. Keep your head on swivel, bank your Runes often, and travel while mounted for a quick escape if you’re ambushed.

You don’t have to fight alone

Spirits Ashes are a unique item to Elden Ring you can acquire upon defeating enemies. Later in the game you can find or purchase ashes of certain fallen enemy spirits and use them to assist you in battle. To use these ashes you’ll need to collect the Spirit Bell from a mysterious witch near the Church of Elleh, equip them like an item, and activate them when nearby a rebirth monument (you’ll know one of these little markers is nearby via an icon on the left hand side of the screen). Summoning spirits will cost you varying amounts of Focus Points, with the stronger summons costing more. Unlike the online cooperative summoning feature, the spirit is controlled by an AI.

Use cases for Spirit Ash assistants are many. If you’re struggling to sneak past an enemy base, try summoning an AI spirit to take the heat and draw attention away from you. In a similar way, you can use the spirits against strong bosses to draw their focus while you do damage. Again, there is a ton of freedom in Elden Ring and Spirit Ashes play a huge part in that.

Do not blindly select your class

As in the past of the Souls-like games, class selection is the core of Elden Ring. You’re going to want to pay close attention to what class you pick to get the most bang for your buck. The best part is that there is no wrong answer here. Each class serves a different purpose and just about any type of player can find the right fit from the roster. You can find out about the previously revealed classes in our class breakdown.

For example, if you want a magic-focused build it’s best to start as an Astrologer or Prophet. For a more strength-based physical type, a Hero or Vagabond may be the class for you. If you’re looking for something more versatile in dual fields akin to a strength-magic hybrid it’s easy to recommend a Prisoner or Confessor. For those that want to wield advanced weaponry, there are the high Dexterity Warrior and Samurai classes. It’s all about experimenting and examining what exactly you want to get out of your new Tarnished.

Charge attacks are a mainstay in Souls-like games, but Elden Ring takes them to a new level. Instead of only being able to charge standard physical weapon attacks, you can also charge certain skills and spells. Charged spells are especially powerful, not only adding on to the base damage, but many will give these casts different effects. Those effects can vary from added projectiles, longer firing rate, lengthier duration, and larger attack zone.

For example, as many saw in the network test, the Dragon Fire incantation can summon a large dragon head and unleash a wide range fireblast. If the button used to fire this ability is charged (done by holding) then the dragon will continuously fire its devastating blow. This leads to moments where you can get hits on large hordes of enemies at once or even continuously damage a larger foe. As with everything else in the game, you’re encouraged to experiment with these charges and use them in unique ways in a variety of situations.

Pay attention to the Stakes of Marika

When wandering the Land of Realms Between you will come across a myriad of peculiar statues. These statues, called Stakes of Marika, tend to appear when entering new locations where powerful enemies will show up. These structures operate as temporary checkpoints that you can respawn from to prevent a long trip back from your last savepoint. Be sure you prepare for a real fight any time you pass one of them.

Watch for materials and don’t forget to craft

You’ll be doing lots of item hunting and crafting in Elden Ring thanks to the new crafting system. Before you get started, however, you’re going to need to get a crafting kit from Merchant Kale for 50 runes. You can find the merchant after leaving the initial cave and first Site of Grace in Limgrave by heading north to the Church of Elleh (If you see the heavily armed horseback knight, Tree Sentinel, then you’re headed in the right direction). Once you acquire this tool you’ll be seeking different cookbooks that hold a multitude of formulas to craft different items. A few you can purchase from the merchant himself.

For example, one very important recipe will help a lot with your trusty spirit steed, Torrent. After collecting Rowa berries from the many bushes throughout the world, you can craft Rowa raisins. These can be used to heal Torrent and are especially handy when going into battle on horseback.

Use all your offensive mechanics

Elden Ring sees the return and introduction of many mechanics that can lead to even more damage if mastered. The three that you will want to remember the most are Guard Countering, two-handed weapon style, and Power Stances.

Guard Countering entails blocking an attack with the L1 guard button while a shield is equipped and immediately pressing R2 to strike back with a powerful blow. You can do this with both two-handed weapons and shields. It makes fighting back against standard enemies a breeze, as it often staggers them allowing for a quick finish.

Two-Handing weapons, which is done by holding triangle and pressing L1, offers the typical increase in damage. This makes it the perfect workaround for those classes that are less focused on Strength but need to deal heavy damage in a pinch. These attacks can more easily stagger enemies due to the posture damage inflicted.

Finally, Power Stances return from Dark Souls 2 and 3. If you dual wield two weapons that share a type (two axes of different varieties, for example) you can attack with both weapons at once. This stance increases damage output and offers a new moveset.

Elden Ring may be taking us to an all-new world, but that doesn’t mean you can’t come prepared. If you follow these tips and approach all situations with curiosity and determination, you’ll spend less time looking at the “You Died” screen.