So, you’ve reached Haven, talked to the Head Loremaster and finished the prologue. The world of Unexplored 2 now lies at your feet. In a world that is both large and uniquely generated for you, setting sensible goals for yourself might be quite daunting. Here are five suggestions I feel are good starting approaches to discover what the game has to offer.

The Loremaster has a plan that ultimately leads to the destruction of the Staff of Yendor. The first step of that plan is to travel to Temple Jetbeak and uncover hints about the First Valley. If you want to follow the main quest, this is a logical place to start.

Temple Jetbeak should not be very hard to reach, but how far it is can vary between worlds. If it is a long journey, you might want to talk to the traveling traders found near Haven’s entrance. Sometimes those traders go to a place closer to the temple and, if you are willing to pay, they can take you there safely.

2. Back to the Garden

The Garden of Yendor is where you find the Staff during the prologue, and which you flee from when it’s attacked by the Empire. The Garden is a much larger place than you might think. During the prologue you’re only allowed to escape, but there are two more levels to explore.

However, the imperials are still there, so why would you want to go back? As the Task Master might tell you, the Raaf Key can be found in the Garden, and that key is quite useful if you set out to explore the Raaf Temples scattered across the land. It’s also not the only treasure you may find hidden there. In addition, the Garden is directly tied to the history of the Staff, so if you are interested in uncovering its nebulous past, you have another good reason to go back.

The Raafi do not face the threat of the Empire alone. Scattered across the land you can find a couple of clans that could aid you in your quest. Befriending these clans can be a clever alternative course of action as there are many subtle long-term gains.

To befriend a clan, you will need to bring a gift to their leader and then pass a fortune test. Suitable gifts, such as special tomes and maps to potential mines, can be found throughout the land. Sometimes the Task Master in Haven can indicate where such things might be found, but in most clan villages you can also find a traveling Raafi scholar who might have useful intel in this regard.

The best way to get started is to make your way to one of the villages, preferably one that is nearby and not disgruntled. By far the easiest way to reach villages safely is to hitch a ride with a traveling merchant.

Another important way to make progress in Unexplored 2 is by crafting magic items. To this end you’ll need sigils. Sigils can be found in many places, although their supply is somewhat limited. If you have a sigil, you can bring it to a forge to craft it into any well-made item you might have found. There is a forge in the vault in Haven, but you’ll frequently come across others in ancient ruins.

Sigils power magic items, but they also power ancient machinery left by the Marang. In fact, the forge in Haven is powered by a form sigil, as are all working forges in the world. This makes these machines good places to look out for when hunting for sigils. Scrying stones, magic hearths, root singers, they are all powered by sigils. However, these machines often do have their own purpose; the Marang built them for a reason, so it might not always be in your best interest to simply grab any sigil you encounter to power magic items.

Unexplored 2 is a game about travel and exploration, and why not do that? There are so many things to discover, many of which only have an indirect impact on your quest. Simply traveling around, figuring out how things work is a rewarding pursuit. You haven’t truly experienced the game fully if you haven’t braved the arid wastes of a red sand desert; if you haven’t blinked between two spires in a dandelion highland; if you haven’t controlled a sky sprite to summon a lightning storm.

If you plan to go on long journeys it does pay to prepare for them. Travel gear can be just as important, and just as bulky, as heavy armor. Stop to rest when you are fatigued, and try to forage for food when you have the opportunity. Have a look at your map before setting out, talk to locals, they might have a good idea where you can cross rivers, mountains, or find good places to rest. The world is your oyster. Enjoy! 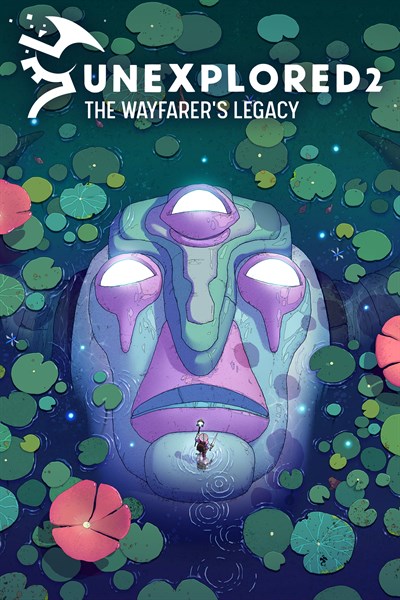 ☆☆☆☆☆ 8
★★★★★
$24.99 $22.49
Unexplored 2 creates a vast, rich fantasy world for you to discover. It has a cool twist on permadeath: your character may die, but the world might persist. The game is an ambitious, procedural action-RPG without grind, xp, or gold. Instead the story is all about your choices and their consequences as history unfolds. As the titular Wayfarer you take on the quest to destroy the Staff of Yendor, for which you’ll have to traverse your world. Along the way you’ll meet tribes, encounter magical creatures and explore ancient ruins to discover mythical weapons and historic items. The game is challenging and you will die often. You may make a wrong choice, take on one too many creatures, or forget to stock up on food before traveling a desert. Whatever the reason, when your character dies, they’re gone. No autosaving or quickloading.
However, you can choose to continue your adventures with a new character in the same world, a few years later. Your new character will witness the result of the choices your previous adventurer made. You can leave items in a safe spot, ready for your next Wayfarer to pick up and use. You can try to fulfill your quest to destroy the Staff of Yendor with consecutive Wayfarers in the same world. However, when you die during your final mission, your world ends. Permanently.
So, make sure you are prepared well and know everything there is to know about the last and most dangerous part of your adventure.
When you fail, that world vanishes. The only thing left to do is to generate a whole new world with its own history, and begin the quest anew.