I hope you have all been enjoying the chance to live out your most despicable plans to take over the world when playing Evil Genius 2: World Domination, which is available to play now with Xbox Game Pass.

Today I am delighted to say that we have just released a chilling new batch of in-game content which will give you even more ways to conquer the globe.

The new Oceans Campaign Pack, available now on the Xbox Store, brings the big freeze to Evil Genius 2 and the new tricks, tools and talents at your disposal will help you give those pesky Forces of Justice the cold shoulder.

First up we have Polar, our newest Genius. She is an ecological mastermind with her heart set on saving the planet by cooling it right down.

Fueled by her frustration that the Forces of Justice aren’t doing anything to stop the world burning, she has decided to take matters into her own hands. And because she’s an Evil Genius… Well, Plan A is always ‘Build a Doomsday Device’. Z.E.R.O. is a terrifying new weapon capable of freezing the earth to its very core. This of course comes with its own unique campaign as Polar strives to reshape the world in her own, frozen image.

All this focus on the frozen parts of the world has also opened up a brand new Arctic Lair. While Polar can use this as her base of operations, she can make herself at home in any of the Tropical Lairs, too. Meanwhile, all of your current favourite maniacal overlords can set up in the Arctic, as well. Evil truly does get everywhere.

But enough of talking about the surface stuff. Let’s dive deeper… into the five new Ocean Regions making their debut on the World Map.

In order to make the most of the new underwater possibilities presented by the Oceans Regions you’re going to need Submarines. As luck would have it, we have added those to the game too. You will need to set your Engineers (a new minion type) to work in their new Workshop where they can build subs for exploring and turrets to protect your lair.

This cool new pack also adds a new Force of Justice Agent divers (J.A.W.S), and an armoured Super-Agent called Deep Six. However, given the right ‘persuasion’, you can turn the Super-Agent to become your Henchman.

Finally we all know that a happy Worker is a productive worker so we need to keep them comfortable, wherever possible, although sometimes a whack from Polar’s trusty staff can do the trick. A new Temperature system means that your workforce’s productivity will be affected if they get too cold or too hot. You will need to place heaters and air conditioning around your Lair to ensure optimum working conditions to get the most out of those little blighters. The temperature system will come into effect in all Lairs, not just Arctic.

As you can see, the Oceans Campaign Pack adds a whole host of new gameplay possibilities and cool new ways to take on the world. We hope you have a lot of fun experimenting and taking on the Forces of Justice!

Evil Genius 2: World Domination is playable now with Xbox Game Pass and the new Oceans Campaign Pack is available to buy from the Xbox Store. 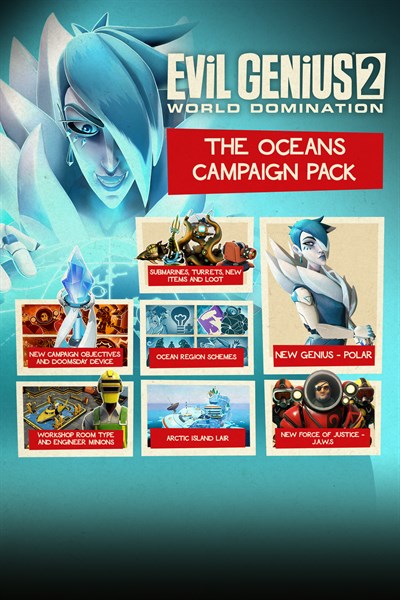 ☆☆☆☆☆ 2
★★★★★
Unleash dastardly chaos as a brand new Genius – the ecological mastermind Polar! Along with a frosty new Arctic Lair, story Campaign and an equally chilling Doomsday device.
Train an army of eccentric Engineer minions who will tinker away in their Workshop to create and maintain your fleet of submarines, and array of deadly turrets. Your minions will need to keep warm as the new temperature system means their productivity and equipment will be affected if they get too cold or too hot. Place heaters and air conditioning to ensure optimum efficiency.
Go under the radar and explore the 5 Oceans for sinister new schemes, but watch out for the Forces of Justice! Do-gooder divers and a new armoured Super Agent have reached you through your criminal intelligence network. Perhaps given the right persuasion, this Super Agent can be turned and become a valuable Henchman? The Oceans Campaign Pack includes: – Polar – a new Genius, with accompanying story Campaign, Sanctum and Doomsday device.
– Unique arctic Lair (useable with any Genius)
– Engineer Minion type
– Workshop room type
– New enemies (J.A.W.S, Diver, Super Agent Deep Six)
– New items (including Submarines and Turrets)
– 3 new Loot items with accompanying objectives (Poseidon’s Trident, Ruins of Atlantis, and the legendary Nautilus)
– Decorative Items
– Temperature System
– 5 new ocean Regions with accompanying Schemes 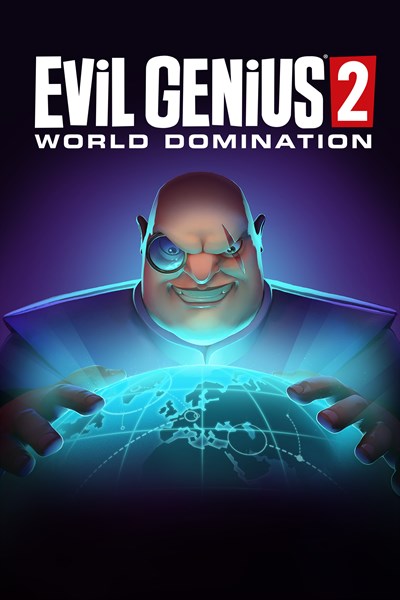 ☆☆☆☆☆ 138
★★★★★
PC Game Pass
Xbox Game Pass
Evil Genius 2 is a satirical spy-fi lair builder, where players take control of an Evil Genius and set their plans for world domination in motion. When it feels this good to be bad, the Forces of Justice don’t stand a chance! Build your own unique evil lair and cover operation, Train a force of criminal minions, Defend your Lair from the Forces of Justice, and Dominate the world with a Doomsday Device in this direct sequel to the 2004 cult classic! Cruel Constructions! Every villain needs an island lair, so pick your paradise and put your own sinister stamp on it! Shape the internal structure of your hazardous hideaway to fit your play-style, and construct wonderfully wicked devices for your minions to put to use. Atrocious Anti-Heroes! Competence isn’t going to cut it when you’re running an evil operation. As you expand and train your minion workforce, you can create new specialists to help further your evil plans! Need something a little more…intimidating? Recruit powerful Henchmen that complement your play style; every mastermind needs a right hand…or several, in fact! Dastardly Devices! The Forces of Justice are annoyingly punctual, so supplement your brute force by researching and developing a series of trap networks! Send those do-gooders spinning with a Pinball Bumper, or put the chomp on them with the Venus Spy-Trap. While one trap is good, more is…evil-er. Combo your traps to banish intruders for good! Nefarious Plots! Carry out evil schemes to further your plot to build a Doomsday Device and dominate the world! Sell the British Royal Family, Kidnap the Governor of Maine, and literally BAKE ALASKA. With hundreds of potential objectives, variety is the spice of strife.