Deathloop is now available on Xbox Series X|S, Windows 10/11 PC, and with Xbox Game Pass, PC Game Pass, and Xbox Cloud Gaming (Beta). To celebrate its arrival on these platforms, we had the opportunity to speak with Game Director and Studio Director at Arkane Lyon Dinga Bakaba to tell us more about the game itself, its evolution since launch over a year ago, and about the importance of diversity in the video game industry.

Deathloop is now available on Xbox, one year after its first release. How has the game evolved since its initial launch?

Since the release of the game, we have added several things. Features such as the photo mode that we worked on with the virtual photographer community, accessibility options… many fixes. We’ve also integratedcrossplay for matchmaking, which allows you to find more players, but also a new weapon,a new type of enemy, original ability upgrades, some of which are designed for multiplayer, or a brand-new power. We’ve tried to make sure that these things fit into the core of the game, for example, to get the new power you’re going to have to do something specific. Finally, we added a sort of epilogue to one of the endings. This was important to us to bring things full circle and have a more compelling emotional resolution on that particular ending. Those who have already finished the game on another platform will have new reasons to do some more looping!

What has been the feedback from players since the release of the game?

Looking back, the reception of the game was beyond our expectations. Before it was released, we thought it was going to be a very polarizing title, that people would either love it or hate it, and that all it took was a handful of people loving our creation to make us happy. In reality, many more people loved it, and said good things about it. It’s the result of decisions made along the way, sometimes risky ones, and we’re proud of that.

According to you, what makes Deathloop unique? What aspect are you particularly proud of?

Overall, I’m extremely proud of the fact that we were able to create a structure for the game that is not linear, not similar to the open worlds that we see a lot. Our structure is unique, it fits our story, our world and it was a very risky bet. I’m not convinced that this structure can be applied to any other game, because it’s intrinsically linked to its purpose, its specificities. I can imagine someone taking inspiration from it, but I don’t think we’ll see anything similar anytime soon. I’m proud of it when I look back on it, but during development it was pretty scary, because there was no template to present to the team, we had to clear our own path, which is always more intense.

At the Pegases 2022 French ceremony, Deathloop received five awards and you were voted Personality of the Year. How did you feel?

Before the ceremony, we had already received awards abroad, but to receive all these awards from the French industry, it is certainly very rewarding. Even though we make games with an international scope, we remain a French studio, so it was important for us and we were delighted. As for the prize that was awarded to me personally, let’s just say that it’s easier to be in the spotlight to talk about what you’ve done as a team, the fruit of several years of work by hundreds of people. When you talk about a career, what you did individually for the industry, it’s more difficult. I was proud, I accepted this award because I worked hard in this industry. It wasn’t easy to get into it or stay in it, and I’m glad it’s being recognized, not just for me but for all the people who will never be in the spotlight who have a more admirable background than I have. It’s also an opportunity to inspire a new generation, to show them that it’s possible.

In your thank you speech, you stressed the importance of diversity in the video game industry…

Perhaps it is up to us, as industry players, to make more of an effort so that the next generation no longer asks this question. If we take the example of the place of women in the industry, we are not at the same point as 10, 15, or 20 years ago. Things are definitely moving forward. For Deathloop, all the choices we made, all the things that made it possible for this work to exist, stem from the personality of each and everyone. If we all looked the same, I’m not sure we could have achieved the same result. This sum of identities, cultures and human experiences allows us to create unique works. When you’re in a team and you have to deal with the sensitivities of each other, it helps not to find yourself in front of a uniform blob of opinions, with people watching the same series, listening to the same music. In these conditions, the game we would release would perhaps not be different from the one created by another studio composed in the same way. As far as I’m concerned, it’s more than just a theory, Dishonored was developed on two continents, with Americans, French and other people of various nationalities scattered throughout the two teams. And this dialogue between our different cultures has obviously allowed us to make some interesting choices on this series. I’ve been living with this richness for 12 years, so for me it’s very concrete.

What advice would you give to those wishing to work in this industry?

My father had a career in entertainment and even though it wasn’t easy for him, I had a concrete example of someone fighting for his passion against all odds and who managed to make a living from it. And yet, I still had a hard time getting into the video game industry. But things are changing, you have to know that if you don’t find a place here, you’ll find it somewhere else, whether you have to change jobs, studios or countries. You have to remember that this notion of not having a place is in your head. Every studio, every project, every person is unique, the hardest part is convincing yourself that somewhere in this industry you will find your creative family, that it exists and that you will eventually meet it. You also have to be convinced that you’re not just going to catch up, but that you have something to bring. We have to tell ourselves that our vision is useful, our voice is useful.

What do you think of Game Pass as a developer? How do you feel about Deathloop being available in Game Pass upon its release on Xbox?

As a developer, with the Cloud, the ability to be able to launch a game quickly, even on my phone, is very useful for me to go get a mechanic, take a screenshot or video and share it with the team. When it comes to Deathloop, my answer is going to be very simple. The reason we got into this industry was to get people to play our games. When I hear that overnight, so many players are going to be able to enjoy our game at the same time, I’m thrilled! More people means more opinions, more feedback… and it also allows us to reach certain territories where video games are less accessible because they’re very expensive; I’m thinking of Brazil, for example, where Arkane’s games have many fans. Making our game more accessible, we don’t think twice about it. It also increases the proportion of people who won’t stick to someone else’s opinion, whether it’s good or bad. I told the team many times during development that our enemy is apathy. If people try the game, whether they like it or not, that’s a win. Having one of our games in Game Pass means that we can get feedback from more and more people for a long time.

And as a gamer, what do you think of Game Pass? Have you made any amazing discoveries in the catalog recently?

I think it’s a diverse and qualitative offer, with big games as well as original proposals. For me, the main benefit is the invitation to try games that you wouldn’t necessarily have invested in. When I was younger, I didn’t always have enough money to buy games, so I used to lend them to friends, which allowed me to try out a lot of things, and with Game Pass I’m getting that feeling again. When I finally had enough money to buy my own games, I focused on the things I liked best, I stopped playing certain types of games altogether. With Game Pass, I’m rediscovering certain genres and I can also catch up on titles that I would have missed for one reason or another. As far as discoveries go, there are really plenty… I think the latest one is Power Wash Simulator. I don’t know what could have made me buy this game, even the advice of a friend, and yet it’s super fun, it’s relaxing… We have single player games, multiplayer games, very short titles that you can finish in 4 hours, others that you will finish in 150 hours… It’s really nice!

Thanks to Dinga Bakaba for taking the time to answer our questions. Deathloop is now available on Xbox Series X|S, Windows 10/11 PC, and with Xbox Game Pass, PC Game Pass, and Xbox Cloud Gaming (Beta). 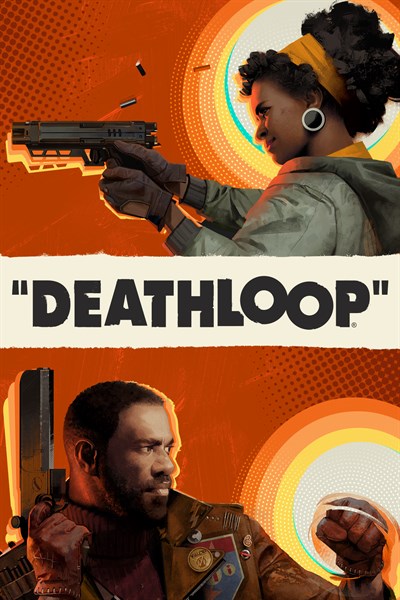 ☆☆☆☆☆ 223
★★★★★
PC Game Pass
Xbox Game Pass
DEATHLOOP is a next-gen first person shooter from Arkane Lyon, the award-winning studio behind Dishonored. In DEATHLOOP, two rival assassins are trapped in a mysterious timeloop on the island of Blackreef, doomed to repeat the same day for eternity. As Colt, the only chance for escape is to end the cycle by assassinating eight key targets before the day resets. Learn from each cycle – try new paths, gather intel, and find new weapons and abilities. Do whatever it takes to break the loop. IF AT FIRST YOU DON’T SUCCEED… DIE, DIE AGAIN Every new loop is an opportunity to change things up. Use the knowledge you gain from each attempt to change up your playstyle, stealthily sneaking through levels or barreling into the fight, guns-blazing. In each loop you’ll discover new secrets, gather intel on your targets as well as the island of Blackreef, and expand your arsenal. Armed with a host of otherworldly abilities and savage weaponry, you’ll utilize every tool at your command to execute takedowns that are as striking as they are devastating. Customize your loadout wisely to survive this deadly game of hunter vs hunted. SINGLE PLAYER GAMEPLAY INJECTED WITH DEADLY MULTIPLAYER Are you the hero or the villain? You’ll experience DEATHLOOP’s main story as Colt, hunting down targets across the island of Blackreef to break the loop and earn your freedom. All the while, you’ll be hunted by your rival Julianna, who can be controlled by another player. So if you’re feeling devious, you, too, can step into Julianna’s stylish sneakers and invade another player’s campaign to kill Colt. The multiplayer experience is completely optional, and players can choose to have Julianna controlled by AI within their campaign. THE ISLAND OF BLACKREEF – PARADISE OR PRISON Arkane is renowned for magnificently artistic worlds with multiple pathways and emergent gameplay. DEATHLOOP will present a stunning, retro-future, 60s-inspired environment, that feels like a character within itself. While Blackreef may be a stylish wonderland, for Colt it is his prison, a world ruled by decadence where death has no meaning, and delinquents party forever while keeping him captive.