The Smite Houses at War Battle Pass brings a host of new fantasy and armor-themed cosmetics, including Yu Huang’s first new skin, House Dragon Yu Huang! Embrace the might of dragons with this Draconic skin instantly when you buy the Battle Pass. As you bravely challenge the other Great Houses and progress the pass, you’ll unlock incredible cosmetics and two more skins; House Jackal Anubis and House Phoenix Amaterasu. If you manage to make it to the end of the pass, you’ll be rewarded with House Unicorn Chang’e – cutting a regal figure in her fantasy unicorn-themed armor. Test your might against the Great Houses of Smite and you’ll certainly be pleased by the rewards that await you.

A brand-new Battle Pass isn’t all we’ve got for you in this update; we’re also going to be updating the Conquest map with the brand new Volcanic Chaos Conquest! This fiery map embraces Polynesian themes with a beach on the order side and a volcano alongside the Fire Giant. This refresh will also come with a number of spicy changes to the structure and mechanics of the map; most notably the Duo lane, where the Naga camps behind Gold Fury (who now also keeps spawning throughout the match) will have their pathing reworked, and the “Safe” Naga camps have been merged into one contestable camp that drops Indra’s Scepter, rather than coming from the Obelisks! The changes to the map and jungle also include an Invader’s Curse rework and the new Polynesian Obelisk. This obelisk change makes the Jungle Mists persistent and allows for Crab Offerings, replacing the Lost Knights with various mini jungle monsters! That’s not all of the changes, though; a number of the important jungle objectives have had exciting adjustments, so you should have some new experiences out on the battleground!

Finally, for all you Avatar: The Last Airbender fans out there, make sure you’re not a few plums short of a fruit pie, because Momo Ratatoskr is coming to the battlegrounds! Take our favorite flying lemur out for a good time (and maybe some team fights!) If that’s not enough, the Odyssey: Soaring Isles is continuing as well; unleashing Catlas Atlas and Twilight Sky Jing Wei. The Odyssey’s discounted purchase price increases over time; so be sure to complete the event and instantly get your hands on the Brand New T5: Crow of Torment Hades! Lest his crows come to strike fear into the unworthy!

Hop into Smite today and check out all the new content in the latest update, including the Houses at War Battle Pass, Volcanic Chaos Conquest, and Avatar: The Last Air Bender – Momo for yourself! 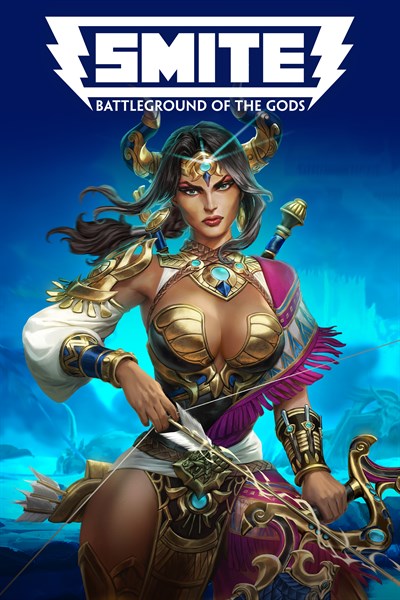 ☆☆☆☆☆ 1261
★★★★★
Xbox One X Enhanced
Enter the Battleground of the Gods Join 35+ million players in SMITE, the world’s most popular action multiplayer online battle arena. Become a legend of myth, enter the Battleground of the Gods, and play FREE now! 100+ Gods
Unleash each deity’s unique strategies, legendary weapons, and earth-shattering powers. Rain lightning down upon your foes as Zeus, assassinate from the shadows as Loki, or transform and trick your foes as the Monkey King, Sun Wukong. Which God will you choose? Unique Perspective
Unlike other MOBAs, SMITE puts you directly onto the battlefield with a third-person action viewpoint. From blind-side ambushes to aimed shots, a new pantheon of strategic possibilities awaits. Become Godlike
Never played a battle arena before? Don’t worry. Auto-buy, auto-level, and the deathmatch-like Arena mode let you jump right into divine MOBA action. Aspiring pro? Top the ladders, join a competitive team, and you too could be playing at the SMITE World Championship. © 2012 – 2021 Hi-Rez Studios, Inc. “SMITE”, “Battleground of the Gods”, “Titan Forge Games”, and “Hi-Rez Studios” are trademarks or registered trademarks of Hi-Rez Studios, Inc. in the U.S. and/or other countries. All trademarks and copyright material are property of their respective owners. All rights reserved. TRANSFORMERS and all related characters are trademarks of Hasbro and are used with permission. © 2021 Hasbro. All Rights Reserved. Licensed by Hasbro.