Just after wrapping all sorts of certification tests and getting excited for the release of NeonLore, the usual sense of anxiety wave hit me: What if gamers don’t understand what we are trying to achieve here?

I would classify ourselves as real indie developers. Allow and excuse me to make a bit of pun here by adding the word “real”. We are not in financial debt to anyone and we are really a studio of less than ten working people during all times.  And we have not received any external investment up to date, while we have released a dozen titles in the last three years.

Indie developers likes us have a different kind of anxiety when we launch a game: “Will the game sell enough to cover costs?” is usually replaced by a more tangled question:

“Will the gamers understand us”?

Nothing will happen to our indie studio if NeonLore financially tanks. We’ll continue to make and release indie projects. We have grown a thick enough skin to ignore most gaming journalists who look at our five-dollar-priced games using the same scope that they review 60-dollar priced games. What we usually need is a bit of inspiration to carry further and continue to take risks and try something different. Sure, running an indie game studio is a business and running a sustainable business is as draining as a boss-fight in a FPS game. However, getting encouragement as indie developers is the true support that we need. And this time, the inspiration for this article came to me when I read a recent interview with [email protected]’s director Chris Charla. He indicated how much value he gives to indie games by saying, “They don’t have to try to be everything to everyone.”

And yes, in that sense NeonLore is a small game. But in it has some big ideas, maybe it might turn into a whole different genre, maybe it won’t. We can’t know, we don’t want to know. As indie developers, we did what are supposed to do, we had to experiment within our limited resources.

NeonLore will be called just another walking simulator by some. To us, it experiments by incorporating audio books into the game, which we believe to be an interesting way to bring books to different audiences who normally wouldn’t meet with that kind of medium. Chris Charla continues in the same article: “Indie games are the most exciting content on the planet”, which inspired me to further elaborate about NeonLore, and what we are trying to establish as a genre by starting with this game : What if you wake up one day and your Xbox app notifies you that your favorite author’s latest audio book is ready to launch on your Xbox system in the form of an adventure game? Who wouldn’t not want to listen to Stephen’s King’s latest book while walking around locations inspired from that very novel, on the big screen, with glorious 4K textures around?

I would, as a gamer.

As a game developer whose background is in literature, this would be a dream-come-true and will open broad sub-ranges and alternatives in the socio-cultural space of video games. Mums and teachers complaining about teens not reading books? They are missing outmoded milestones of classical literature? Well, it would be great if they did really read the books, but as precursors in this medium, we can suggest an alternative : Let’s travel back in time to early 20th century New York City and let’s see the world through Nick Carraway’s eyes, and while walking around in such envrionments where we don’t have to worry about shooting zombies, we listen to Scott Fitzgerald’s masterpiece, The Great Gatsby.

Let’s see if other gamers would agree with me or not: in NeonLore, hopefully you will enjoy listening to four different short-novels, written by four different sci-fi authors exclusively for this game, while enjoying cyber-punk themed vistas and a bit of puzzle-solving as well.

Finally, but not least, another big thank you to the Xbox team for supporting and encouraging indie developers with such risky projects. NeonLore is available today on Xbox! 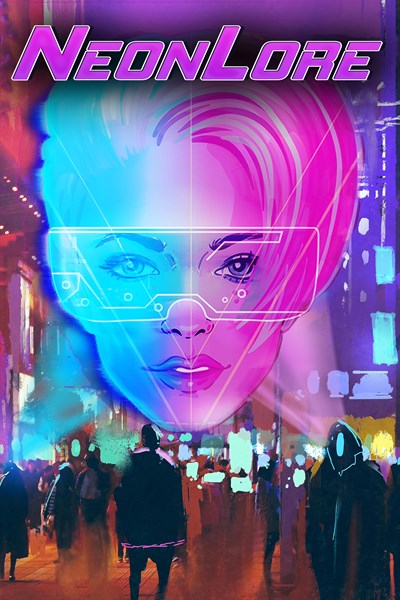 ☆☆☆☆☆ 5
★★★★★
Neon-Lore is a first-person free form exploration game. You’ll meet interesting characters and discover what had happened to human race in the near future. As you will roam along the neon-soaked streets, you’ll discover what the world has become, how life goes on in a world of intriguing fusion of chaos and technological advancement. In Neon-Lore, you will solve puzzles and encounter with various characters and learn about their past life, dreams and fears…And get a chance to discover deeper about the social transformations that has impacted human life in the 21st century… Features: *Discover the world at your own pace.
*No failing or quests, you decide about how you explore the world.
*Beautiful, cyber-punk themed environments.
*Meet 40 different characters and learn about their backgrounds.
*Get access to 4 different audio books that contain 4 different cyber-punked themed novels, written exclusively for this game by sci-fi authors.
* Relaxing and exciting cyber-punk themed soundtrack.