Shiva, the Destroyer, arrives in Smite and brings peace to an era of feuding gods — available now for Xbox One and Xbox Series X|S.

Shiva, our first Hindu God since Ganesha’s release in 2017, is an exciting addition to our roster of mythological legends. While developing Shiva, we took extra care to stay true to the historic texts and depictions more than ever as the deity is actively worshiped by millions of practitioners of the Hindu religion. To ensure accuracy, we brought on an expert on Hinduism to consult on each asset of Shiva’s release which includes everything from his kit, cinematic, art, and more. Alongside our consultant, the team conducted thorough research to make sure that we were accurate and respectful in Shiva’s portrayal in Smite. Our community was thrilled with his initial release announcement during our Hi-Rez Showcase in January and we hope we exceeded expectations!

When developing gods, we always rely on their mythology as a starting point, but for Shiva, it was a guiding principle for every step in the process. Shiva wields a trident, known as the Trishula, with the drum, or damaru, bound to it. The Trishula is a symbol of Shiva’s three roles of the creator, the preserver, and the destroyer, and the damaru symbolizes the music that Shiva’s famous dances would be accompanied by. Around his neck are two more symbols, the serpent and the darker blue shaded throat. Other important details in Shiva’s look is the sacred flame in his hand, his blue skin symbolizing infinite power and mystery of the sky or the ocean. There’s more to Shiva’s visual design – are you able to name them all?

As for his kit, we knew right away that we wanted him to be tanky and difficult to bring down. When we initially did our kit design research, we explored different classes based on the complex themes of his background. In the end, we felt him fitting best in our Warrior class but don’t be surprised to see him be flexed into our roles in different game modes.

Shiva is a master of both creation and destruction, opposites that make up Shiva’s character. This key concept brought on the core of his kit design: cycling between two different buff states. Shiva will cycle through Bliss and Destruction forms as he fights, giving him passive bonuses and different secondary effects on his first three abilities. One ability I want to call out is his Ultimate: Shiva Tandava. Shiva performs his Tandava, a divine dance, that offers CC immunity and damage mitigation alongside different effects for what steps you take during the dance. I am amazed by what the Titan Forge team has done to make this dance feel authentic and powerful.  Be sure to read the 9.2 Update Notes on smitegame.com/news to understand his whole kit. Remember: you can instantly unlock Shiva, his Voice Pack, a Limited Ascended Skin, and more by purchasing the Smite Season Pass 2022. This pass will also unlock incredible content for every new Season 9 God, all-year long.

Before I sign off, I just want to highlight what else is happening in this update. The Dharmic Era Event still continues with the addition of all-new skins including Oni Huntress Artemis. And we can’t forget about the community requested favorite: Big Gun Khepri will be available as the Viewer Pass Bundle skin. I hope to see everyone in the battleground and can’t wait to see the amazing Shiva plays in Smite! 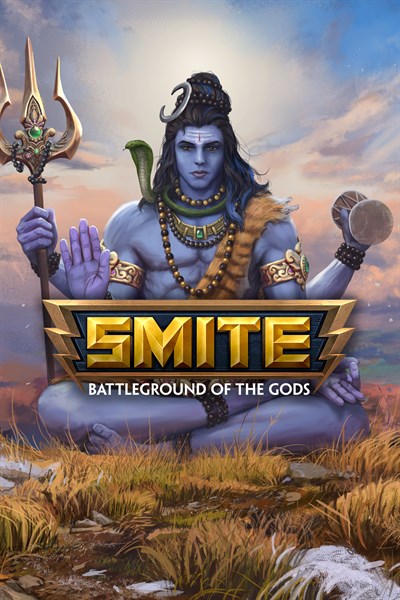 ☆☆☆☆☆ 1215
★★★★★
Xbox One X Enhanced
Enter the Battleground of the Gods Join 35+ million players in SMITE, the world’s most popular action multiplayer online battle arena. Become a legend of myth, enter the Battleground of the Gods, and play FREE now! 100+ Gods
Unleash each deity’s unique strategies, legendary weapons, and earth-shattering powers. Rain lightning down upon your foes as Zeus, assassinate from the shadows as Loki, or transform and trick your foes as the Monkey King, Sun Wukong. Which God will you choose? Unique Perspective
Unlike other MOBAs, SMITE puts you directly onto the battlefield with a third-person action viewpoint. From blind-side ambushes to aimed shots, a new pantheon of strategic possibilities awaits. Become Godlike
Never played a battle arena before? Don’t worry. Auto-buy, auto-level, and the deathmatch-like Arena mode let you jump right into divine MOBA action. Aspiring pro? Top the ladders, join a competitive team, and you too could be playing at the SMITE World Championship. © 2012 – 2021 Hi-Rez Studios, Inc. “SMITE”, “Battleground of the Gods”, “Titan Forge Games”, and “Hi-Rez Studios” are trademarks or registered trademarks of Hi-Rez Studios, Inc. in the U.S. and/or other countries. All trademarks and copyright material are property of their respective owners. All rights reserved. TRANSFORMERS and all related characters are trademarks of Hasbro and are used with permission. © 2021 Hasbro. All Rights Reserved. Licensed by Hasbro.