Hey hey! Ian from Drinkbox Studios here, sharing my excitement for Nobody Saves the World’s first DLC pack: the Frozen Hearth, launching today! It’s packed with tons of new gameplay including a new overworld area to explore, two new playable forms, new challenges and puzzles to take on, and new friends to meet along the way.

The Frozen Hearth takes you to a hidden region deep underground, home to a society that values creativity and competition above all else. Their annual tournament, The Tempering, is full of wild challenges and puzzles that will push any form-changing wizard to their limit. Can you kill hundreds of enemies in just one minute? Can you destroy a room full of targets without making a single attack? Can you get a hole-in-one in a makeshift game of minigolf? With enough cleverness and skill, the answer to all is: yes!

By rising in the ranks of The Tempering, you’ll unlock two brand-new forms: the wildly different Mechanic and Killer Bee. The Mechanic is a scrappy, mustachioed gent who fights by building ranged turrets and repairing them with his oversized wrench. On the other hand, the Killer Bee is a tiny, nimble fighter who darts from one target to the next, grabbing honey that bursts out of enemies and getting powered up from the sugar high.

Of course, the new forms can be used anywhere in the main game once they’re unlocked. Better yet, their abilities combine with the base game’s forms to create some really bonkers customizations. You can also play the entire DLC in solo or co-op, as long as you and a buddy both own the DLC. Cross-play is enabled for Xbox Series X|S, Xbox One and the Windows 10 Store, so grab a friend and get competing!

From me and everyone at Drinkbox, we hope you enjoy playing the Frozen Hearth as much as we enjoyed making it. 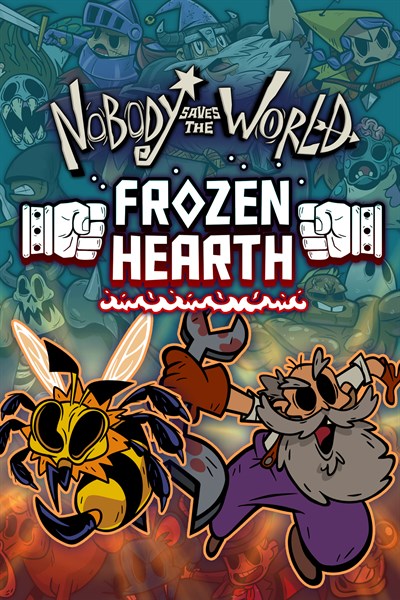 Nobody Saves the World – Frozen Hearth

☆☆☆☆☆
★★★★★
In a forgotten region deep underground, warriors compete for riches and glory. Only a master of forms and customization can earn the ultimate rewards for themselves. Do you have what it takes?? Meet new friends and rivals as you compete in The Tempering, a series of puzzles and challenges that will push your skills and creativity to their limit. Unlock the new Mechanic and Killer Bee forms. Use their powerful abilities to earn the ultimate glory and help save the world!