“Every challenge brings opportunity;” that’s what we thought when we started working on the next expansion for Surviving the Aftermath. With Shattered Hope we went back to the core of the game,

focusing more on the survivors, testing their limits instead of aiming for a grand adventure or end goal. The new scenario revolves around the moon, which went through a major collision event that ejected big parts of its outer layers into space. Most of that debris is orbiting Earth and falling down in meteor storms and survivors must, once again, adapt to a new cataclysm. We’re excited to release Shattered Hope on Xbox today!

What is Surviving the Aftermath? Well, our game debuted first in Early Access in October 2019 and launched in November, 2021. It is a survival colony builder set in a post-apocalyptic world where the player starts with nothing except a handful of survivors. It is a combination of colony building and world exploration where colonists must first learn to survive through the day, before becoming a thriving society in the wasteland, for any survivor looking for a place to call home. It’s a pleasure to talk to players and fans again, revealing what’s behind the scenes of Shattered Hope.

With Shattered Hope, we wanted to dive deeper into the human mind. If it wasn’t enough to survive in the aftermath of civilization, now our survivors have to deal with the Moonfall. That’s right, the moon’s destroyed and its fragments are showering down from the sky, leaving behind destruction, but also some very convenient moon rock deposits. By gathering and refining lunar fragments, survivors can improve buildings’ production and increase their chances of survival. This “boost mechanic,” as we call it, allowed us to add more depth to the whole colony management, providing you, the players, with more opportunities and choices.

With the new expansion, we introduce Hope: a new challenge that is affected by the flow of time and any catastrophic events in the colony. We know that people can work wonders in extreme conditions, even when the only thing that keeps them going is the power of their will. While exploring the persistence of one’s mind, we decided to turn this invisible force into a concrete mechanic. This means that small actions and decisions will have an impact on your colony’s chances to thrive or doom your colonists into the final downfall. Want to boost your colonists’ Hope? Put together a feast and let them enjoy a few moments of peace, fun, and even some good food.

Shattered Hope is the second expansion of Surviving the Aftermath and we definitely hope you’ll enjoy playing it on Xbox starting today! 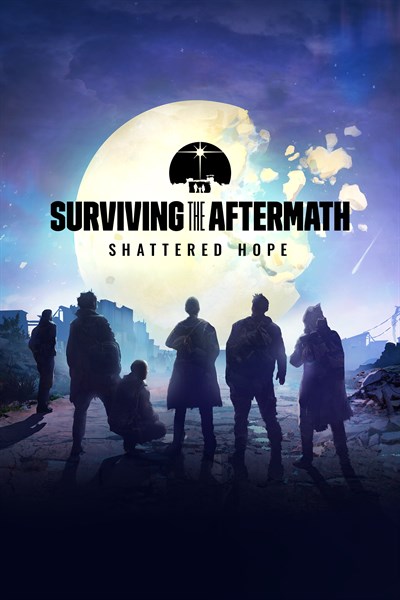 ☆☆☆☆☆ 1
★★★★★
The Moon is shattered. Broken. Lost in the vast space above planet Earth. What was once a beacon of hope in the sky has now left survivors to deal with a new, catastrophic void in “Shattered Hope”, the new Expansion for Surviving the Aftermath. Use the Moon’s fragments to your advantage and make sure to keep your hopes up (literally!) to survive. Key Features Face the Moonfall and use it to your advantage with the new Building Boost mechanic
The Moon is shattered in the sky and its fragments are crushing down on Earth leaving behind them devastation – but also moon rock deposits. You can refine lunar fragments and obtain lunar dust which will be used to increase the production of your buildings for a limited time. This new building boost mechanic is called overtime. Keep your hopes up, and feast! Hope is a new global value that decreases over time and when catastrophes happen in the game. If kept too low for too long, it will trigger a new condition called anguish that, if left untreated, may turn your colonists hostile. So, keep your hope as high as possible by holding feasts at the new colony square building! New production chain: take care of your colonists!
When colonists experience anguish, you can help them by building a trauma center where they will heal. They will recover faster thanks to a brand new medicine called antistress. To make it, you’ll have to grow raw resources on the mushroom farm, then refine them into the actual medicine in the med hut building.