Hiding Spot Games’ upcoming adventure Beacon Pines is not as innocent as it looks on the surface. The scrappy team of three have spent nearly five years lovingly crafting Beacon Pines into a story that could be described as Winnie-the-Pooh meets Stranger Things.

The upcoming narrative game, published by Fellow Traveller and arriving on Xbox One and with Game Pass on September 22, follows the journey of a young boy named Luka. When the old warehouse outside of town starts glowing, and folks go missing, Luka and his friends set off to uncover the creepy roots beneath their town’s cozy veneer.

You’ll play as both the reader of a mysterious book, and Luka, the story’s main character. By exploring the town of Beacon Pines, you’ll discover ‘charms’, collectable words that can be slotted into the narration to completely alter the story that unfolds.

Not only can charms be used to change the outcome of the current branch of the story, but to jump to a completely different point and rewrite the story in drastic ways. To navigate the many story branches, the game introduces you to ‘The Chronicle’, an interactive illustrated tree that branches and expands based on the decisions you’ve made.

Beacon Pines oozes with mysteries waiting to be revealed. How will Luka’s story unfold? His fate, and that of Beacon Pines, will depend solely on the words that you, the player, choose. 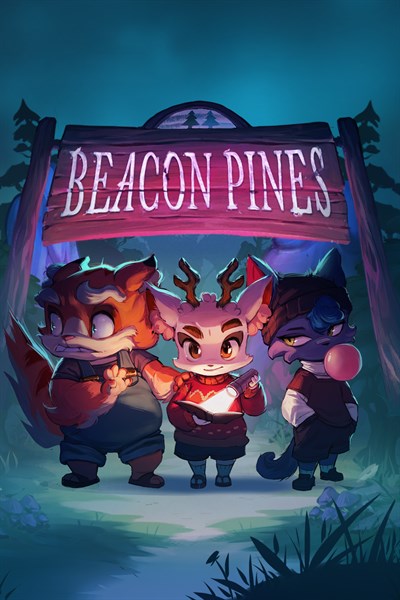 ☆☆☆☆☆
★★★★★
Beacon Pines is a cute and creepy adventure set within a mysterious book. You play as both the reader of the book and its main character, Luka. UNCOVER THE TRUTH
Something strange is happening at the old warehouse, and Luka and his friends seem to be the only ones taking notice. Sneak out late, make new friends, uncover hidden truths, and collect words that will change the course of fate! REWRITE PAST EVENTS WITH CHARMS
While helping Luka investigate the strange goings-on in Beacon Pines, you’ll collect special golden charms, each with a word engraved on it. These charms can be used at certain turning points in the story to fill in a blank word and drastically change everything that follows. DISCOVER NEW STORY PATHS
As the book’s reader, you’ll navigate the story’s turning points using The Chronicle: an interactive story tree that branches and grows along with your choices. Exploring one set of events can unlock new charms to use on another branch, leading you to jump back and forth between entirely different versions of the story in order to unravel the mysteries at the heart of Beacon Pines.