The fourth installment of the Dark Pictures Anthology is launching November 18 for Xbox One and Xbox Series X|S.

With every new Dark Pictures game, we like to listen to fan feedback and include new gameplay features and refinements. With The Devil in Me, we’re presenting a suite of new exploration actions which enhance and enrich the experience of exploring the creepy hotel setting that the team here at Supermassive Games have created.

You will be able to climb walls and vault over obstacles, jump across holes in collapsed floors, shimmy along narrow ledges, and balance across beams or fallen trees. You’ll be able to crouch through broken walls and crawl under broken machinery, and when danger is present, you’ll be able to hide. And characters can now run as well as walk, so you can explore at your own pace.

It’s an intuitive system that gamers will be familiar with and fits nicely with our existing Dark Pictures gameplay. It makes exploring the detailed world of The Devil in Me more immersive and interesting as you’ll hunt for concealed routes and hidden areas where you can find the secrets or tools that will increase your chances of survival. And tools are another new feature. Characters will have a simple-to-use inventory where they can hold tools or objects that they find in the world.

Each of the five playable characters has a tool specific to their role in the documentary film crew. For example, Mark, the director of photography, has a camera that allows him to gather evidence of the crimes they encounter. And Erin, audio tech, has a directional microphone that allows her to listen to conversations through walls and pick up sounds that the team would otherwise miss. There’s a great tradition in horror of the use of unusual viewpoints and technology to disconcert viewers and amplify the terror. And we think the sequence of Erin using her microphone to track a series of escalating horrific noises down the winding corridors of the hotel is one of the scariest we’ve ever created.

Finally, we’ve introduced some light puzzle mechanics into The Devil in Me. The hotel is full of traps, moving walls, and mysterious rooms, so it’s a perfect fit for gameplay that has you scratching your head. Think of the sort of puzzles you might have encountered in Resident Evil or Silent Hill games. You’ll be looking for secret codes, moving things around to find new routes, working your way out of escape rooms, and rewiring antique fuse boxes. The puzzles fit perfectly into the crumbling, oppressive environment of the Island hotel. And whether you solve them or not matters. Characters can live or die depending on whether you find the solution.

It adds up to an exciting package of new features which deepen and enhance the gameplay of the Dark Pictures Anthology and give players more control over how they evade and tackle the twisted killer that is toying with them. But The Devil in Me still delivers on the core elements that our fans love: cinematic horror, impossible dilemmas, terrifying scares, and gruesome deaths.

The team here at Supermassive Games is working very hard on putting the finishing touches to the game, and we can’t wait for you to play it. The Devil in Me launches for Xbox One and Xbox Series X|S on November 18, 2022, and is now available for pre-order on the Xbox Store. 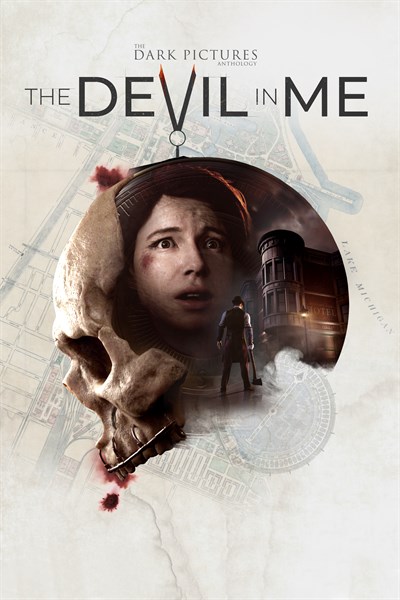 The Dark Pictures Anthology: The Devil in Me pre-order

☆☆☆☆☆
★★★★★
Pre-order now and receive the Curator’s Cut, featuring new scenes playable from the other characters’ perspective with brand new choices and decisions to make. The Curator’s Cut is only available once you have completed the main story. WELCOME TO THE DARK PICTURES A series of stand-alone branching cinematic horror games from the studio behind Until Dawn. Easy to pick-up and play in short sessions, alone or with friends. The Devil in Me is the fourth game in the series and the Season One finale. A group of documentary film makers receive a mysterious call inviting them to a modern-day replica of serial killer H.H. Holmes’ ‘Murder Castle’. It’s an opportunity that’s too good to pass up and could be just the thing they’re looking for to win some much-needed public interest. The hotel is the perfect set for their new episode, but things aren’t quite as they seem. The crew discover they’re being watched and even manipulated, and suddenly there’s much more at stake than just their ratings! Welcome to the Murder Hotel! Nothing is as it seems here, and the amenities are to die for! Explore every nook of the World’s Fair Hotel using the all-new season finale features including character inventory, tool-based puzzles, and expanded movement actions such as run, jump, and climb. Your death is his design
Escape the torturous creations of an evil monster who is hellbent on becoming America’s deadliest serial killer & survive elaborate ‘killing rooms’ where your own death is by the killer’s design. Don’t Play Alone!
Endure terrifying tests of loyalty – will you risk your own life for someone you care for? The two critically acclaimed multiplayer modes are back: share your story online with a friend or aim for safety in numbers through the offline 5-player pass-the-pad mode. Can you outsmart the killer and checkout all your cast? All playable characters can live or die in your version of the story.
PLEASE ENJOY YOUR STAY