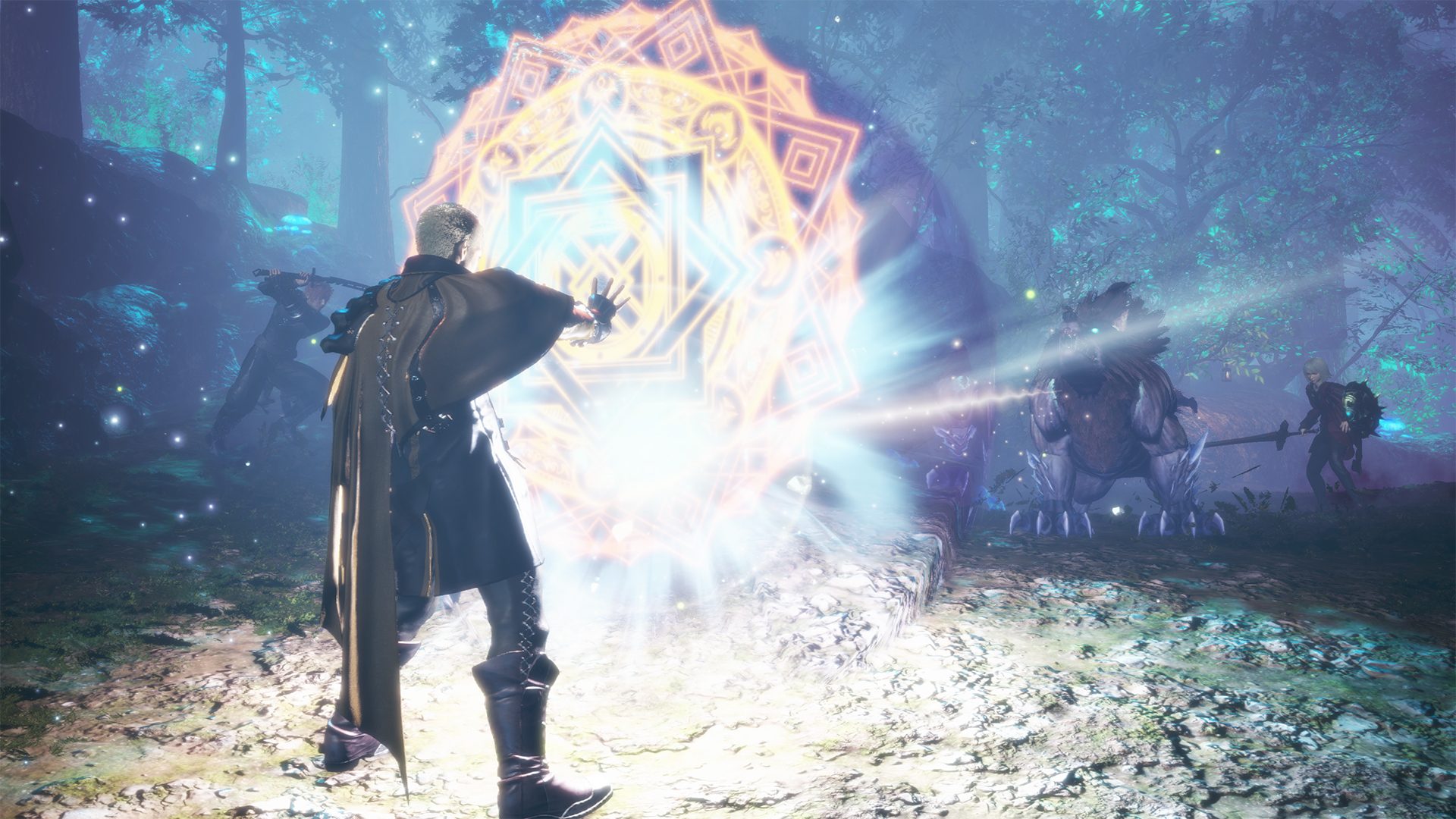 On March 18, Stranger of Paradise Final Fantasy Origin launches for PS4 and PS5. That’s only a few weeks away!

This action-oriented take on the Final Fantasy series has been a genuine passion project for both Square Enix and Team Ninja, and we’re beyond excited that you’ll soon get to play it.

Before that though, I wanted to give you all a closer look at one of the most exciting parts of the game – the job system. Read on, and I’ll show you some previously unseen jobs, and give you some insight into how and why we built the system.

To kick things off, we should explain what jobs are – just in case any of you are unfamiliar with the Final Fantasy series.

Essentially, they’re roles that you and your allies adopt in battle. The job determines your abilities, weapons, and the actions you can take in battle, and switching to a different one will give you access to different moves.

For example, the Swordsman job is – as the name implies – all about attacking up close with a greatsword, whereas the Black Mage job gives you access to spells you can use to attack from afar.

What are some of the jobs in the game?

Let’s take a look at some of the jobs you can use in the final game – all of these we’ve never shown off before (except Thief).

Not every job appeared in a previous Final Fantasy game – some are brand new for Stranger of Paradise Final Fantasy Origin. The Breaker is a perfect example.

This job uses the Zantetsuken – the sword possessed by the Summon Odin in previous Final Fantasy games. The Breaker’s unique action allows you to summon the Zantetsuken to break your foes and try for one-shot kills.

It’s one of the quirkier jobs – difficult to use in some situations, but also very powerful. That makes it really interesting.

Another job unique to Final Fantasy Origin. This job allows you to guard and use an enemy’s magic attack. In fact, its ability to counter magic is the best of all jobs – you can either absorb a magic attack and convert it to MP, or turn it into your own attack.

The last Final Fantasy Origin-specific job we’ll cover today. If you want a real advantage at the start of a fight, Tyrant is the way to go. This job lets you imbue your weapon with elemental effects, allowing you to target an enemy’s weakness with normal attacks and afflict them with elemental vulnerability.

You’d be wise to give this one a go. Sage is a job that lets you toggle between white and black magic, giving you a lot of different ways to approach a battle. Meet certain conditions and you can also unleash the ultimate magic: Ultima.

This is a job that unleashes powerful attacks at the expense of HP. Your damage increases when your HP is low, making its potential damage output the best of all jobs. It’s a high risk / high reward option for advanced players who can manage their health effectively.

This job lets you recover HP as you fight. Its unique action lets you recover health whenever you land a hit – and it’s worth keeping that HP high because damage dealt increases when it’s maxed out.

This flexible job uses special ninja tools to divert and inflict ailments without consuming MP. Tools are limited but can be replenished by interacting with cubes found around the environment.

A thief can steal instant abilities from foes – this can be really advantageous if you steal something powerful. Developing this job will also increase the drop rate of items, helping you collect more weapons and armor.

How did we decide which jobs to include?

You may be wondering how we chose these jobs – and the others that you can equip. The specific ideas for each came from lots of different sources and people, but they all share the same starting point: the weapons.

Early on, we defined the weapons that we wanted to include in the game. Once that was complete, we worked backwards to define which jobs and actions we could add that would support those different weapon types.

For example, we had a spear so we thought about potential jobs that would use this weapon. If you’re talking about spear users in Final Fantasy, it simply has to be a Dragoon, right?

From there, we had to think about the skills that a Dragoon would have, and the type of movement it should have. Once we had the general concept nailed down, we looked at the rest of the series to find actions and abilities that we could build into the game to give it that authentic ‘Final Fantasy’ feel.

Looking to the source

The Dragoon is one example – and in general, there were two ways we approached selecting jobs.

Firstly, we wanted to choose jobs that existed within the Final Fantasy series and build on them in a more action-oriented way. For example, when we were looking at the Ninja, we looked at Final Fantasy III to see which skills would translate into real-time action. Or for the Thief – an archetype that exists throughout the series – which skills would both fit our game and be evocative of that classic job?

We generally tried to capture the spirit of the older games as much as possible, but even so, not every classic move could make the cut. For example, Samurai is a job that appears in Final Fantasy V and uses a Katana to attack – this fits into our game perfectly!

However, it also has a really characteristic attack in Final Fantasy V that lets you throw money at an enemy. When we were working on this job for Stranger of Paradise Final Fantasy Origin, we had a long discussion about whether it was even the Samurai job if players couldn’t throw money!

Ultimately, it just didn’t make sense within the context of our game – money doesn’t really factor into the mechanics of the game, so how would it be implemented? After considering that, we realised it was too difficult to put this skill into an action game in a good way, so we cut it.

So, as you can see, there are some things from classic jobs that just didn’t translate very well, but as much as we could, we tried to respect the spirit and techniques of the different jobs from the Final Fantasy universe.

The second way we approached jobs is where we started with a particular playstyle in mind, then looked for which job we could couple with the concept.

For example, taking inspiration from the Odin Summon in previous Final Fantasy games, we came up with the idea of something that would let the player break and take out enemies in a single hit.

We thought about how to do this, and ended up creating an entire job around it – what would become the Breaker.

There are 27 jobs in Stranger of Paradise Final Fantasy Origin – each with their own playstyles and abilities to master. Making all these jobs fun and mechanically rich has been hard work – but satisfying.

The most challenging job to create was the job that Jack starts with – Swordsman. As this was the first ability players would use – and one all players would use – we knew we had to really pin down everything from the movement to basic attacks and abilities.

We were adjusting it continuously – even up to the release of Trial Version 1 last year. Even then, I wasn’t sure we’d got it quite right, but when I saw Jack and his companions Ash and Jed all fighting with distinctly different styles, I felt like we’d achieved what we set out to do. It’s really fun to use – and many people on the team’s favorite job.

Interestingly, we did a survey across Team Ninja to see what their favorite was. The most popular weapon was katana, and the associated jobs Samurai… and Ninja. Which is quite fitting for the team, really.

We also have some people on the team who aren’t as experienced at action games. They often preferred to use the Black Mage and let the NPC party members do the fighting on the front line.

I suspect everyone will have their own favorite when the game releases, but the range of opinion internally does indicate just how expansive and varied the options are!

I hope you found this dive into the jobs of Stranger of Paradise Final Fantasy Origin interesting. As I said, there are 27 jobs in the final release – all of which have been a true labor of love for the development team (truth be told, I’d add even more if I could, but sooner or later you have to actually release the game!)

You’ll be able to try them all out first-hand when the game launches on March 18. The team and I can’t wait to see what you do with them.