Like with so many multiplayer games, the best things in Valheim happen when you play with your friends. Sometimes you mess up badly, sometimes you triumph, and sometimes you get out with just the narrowest of margins – but you do it together. We thought back on some multiplayer experiences players have shared with us, from bold adventures to humble days in their homesteads, and thought you might recognize yourself in some of them…

Perhaps you have sailed along the coast with your friends and spotted a peaceful-looking village in the meadows. You got a sneaking suspicion something was wrong, and you told your friends, “I think this place is already occupied,” but nevertheless, you kept sailing closer. You all had barely stepped off the boat before people were yelling in a panic about the village chieftain, a Draugr Elite, and you were trying your hardest to push the boat back into the water towards your escape. You got so close too, but the Draugr bested you all, and you had to stage an elaborate ambush in order to reclaim your gear.

Or maybe you know what it’s like to finally tame those beautiful boars and give them carefully chosen names (Boaris and Hamlet), but your buddy just wanted to butcher them for some good meat. While walking around tending to your base you suddenly noticed the boar pens seemed…a bit empty. “Wait, where is Hamlet?” you asked, only to get no response from your friend. None at all. But all those leather scraps in the corner looked oh-so-heartbreakingly familiar. “Did you KILL Hamlet?” you asked your still silent friend. But there was nothing that could be done (aside from naming the next boar Hamlet II).

Or you might remember a time when you managed to get yourself stuck in the mountains. You had no food, and no armor or cloak to keep you warm against the biting winds. Stepping outside of the ramshackle cabin would mean certain death. But your friends were determined to save you, and set out on a most daring rescue mission – fighting off the cold by building campfire after campfire. They made their way to your hideout, and braved both weather and dangerous beasts alike in order to safely escort you home. That’s the kind of loyalty you can’t forget.

Regardless of what your best Valheim memory might be, now is a perfect time to make even more. With Valheim now available in the Microsoft Store and included with PC Game Pass, and with the Xbox release due early 2023, even more of your friends will be able to join you on perilous adventures in the tenth world. The full crossplay support will ensure that you can play together with your friends, no matter what platform you’re using. And once the upcoming Mistlands update arrives, you will need all the help you can get…

Valheim is available now for Windows PC, plus it’s included with PC Game Pass, and is coming to Xbox early next year! 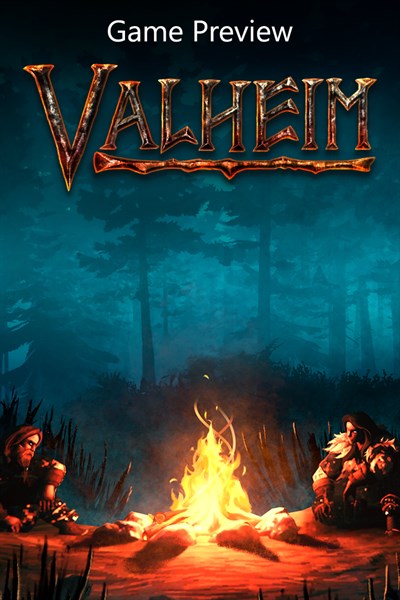 ☆☆☆☆☆
★★★★★
PC Game Pass
This game is a work in progress. It may or may not change over time or release as a final product. Purchase only if you are comfortable with the current state of the unfinished game. Valheim is a brutal exploration and survival game for 1-10 players set in a procedurally-generated world inspired by Norse mythology. Craft powerful weapons, construct longhouses, and slay mighty foes to prove yourself to Odin! EXPLORE THE TENTH WORLD
Explore a world shrouded in mystery. Discover distinct environments with unique enemies to battle, resources to gather and secrets to uncover! Be a viking, sail the open seas in search of lands unknown, and fight bloodthirsty monsters. BUILD MIGHTY HALLS
Raise viking longhouses and build bases that offer reprieve from the dangers ahead. Customise buildings, both inside and out, with a detailed building system. Progress through building tiers to upgrade, expand and defend your base. GATHER, CRAFT AND SURVIVE
Struggle to survive as you gather materials and craft weapons, armor, tools, ships, and defenses. Decorate your hearths and sharpen your blades, grow crops and vegetables, prepare food, brew meads and potions, and progress as you defeat more difficult bosses and discover new recipes and blueprints. KEY FEATURES
-Massive procedurally-generated world where every biome is immersive and distinct, with unique enemies, resources and crafting recipes to discover.
– Play alone or with up to 10 players on player-hosted dedicated servers and experience unlimited world creation and enemies that scale in difficulty.
– Staminabased combat that rewards preparation and skill. Utilize weapon types with unique attacks, different blocking styles, ranged combat, dodges and parries to fight your enemies.
– Rewarding food system where you cannot starve and are not punished for not eating, instead you gain health, stamina and regeneration buffs depending on what foods you consume.
– Intuitive crafting where recipes are discovered as you explore the world, and pick up new resources and ingredients.
– Flexible building system that takes structural integrity and ventilation into account. Build a small shelter or an entire village, make outposts or claim abandoned buildings as your own. Then customize to your liking.
– Sail boats and ships to reach distant lands and explore the sea that offers riches to claim and monsters to fight.
– Epic boss fights that will test even the best prepared vikings and offer rewards that help you on your journey. Full details on the latest status of the game, how you can give feedback and report issues can be found at www.valheim.com.