We’re happy to present our dark fairy tale to all Xbox users! Today, we’re finally ready to show the world our action adventure The Darkest Tales. Available on Xbox now!

What is it About?

The Darkest Tales tells a story of a stuffed bear named Teddy, in a fairy-tale world twisted by nightmares. Our brave hero ventures through these dangerous lands to save his owner, Alicia. He’s going to meet many of the characters you’ve known and loved since childhood — but they may not be how you remember them. But first, a bit of history…

Marco Agricola came up with the concept for The Darkest Tales over ten years ago. It started with an idea that a simple toy can become a symbol of safety and bravery for a child. This idea eventually evolved into the character of a cute teddy bear who, despite his small stature and innocent looks, would learn to fight the monsters that dwell under children’s beds.

Then he thought about presenting children’s fairy tales in a new light, to retell the familiar stories we remember from our early years in a more grim setting.

The landscape of The Darkest Tales is rich and diverse: you can travel through a foggy forest, climb to the top of a magic bean stalk, have dinner in a mysterious castle in the clouds while dodging gigantic forks and knives, then dive into an ocean only to find yourself inside the belly of a man-eating whale. The development team worked hard on each level to make sure you’re completely absorbed into the dark fairy-tale atmosphere.

You’ll meet a lot of old friends on your journey, but be warned: you probably won’t recognize them. The same characters have leapt from the storybooks, from your dreams, into your nightmares!

Far from a sweet girl visiting her grandmother, Little Red Riding Hood has taken to hunting wolves, and wouldn’t mind taking on a bear, either. Pinocchio, Jack of the Beanstalk, the Little Mermaid, and many more — all turned into bloodthirsty monsters who want to sink their teeth into Teddy’s stuffing!

But Teddy is not a timid sort. He might look like a harmless toy, but his resolve is unbreakable. He won’t let any harm come to his friends, and he can handle all the nightmares of this world.

Teddy uses various weapons to fight off the monsters, such as a pair of scissor blades, and a bow with arrows made from needles and thread. Throughout the game our hero will find more weapons and unlock new skills, becoming stronger, faster and tougher. 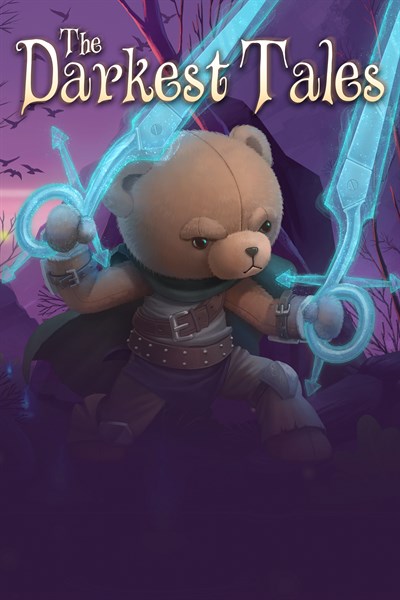 ☆☆☆☆☆ 4
★★★★★
Join a stuffed bear named Teddy on this gloomy and sinister adventure to rescue his owner, Alicia, from the realm of dreams and distorted childhood fantasies. Who else will fight for the life of the girl, now grown-up, if not her long-forgotten and dusty toy? The Darkest Tales is a complex and compelling adventure, full of familiar characters and fairytale landscapes. Over the course of the journey, you’ll have to come face-to-face with the difficult questions of life more than once. Happily Never After
You’ll meet familiar characters from your childhood, but the reunion isn’t likely to be a happy one. The gingerbread men are out for blood, Sleeping Beauty seems to be a couple centuries behind on sleep, and the Little Mermaid looks more like a sea witch than an innocent child of the waves. Teddy Scissorpaws
As it turns out, our hero is a jack-of-all-trades. He crafted a bow and melee weapons from a pair of scissors and uses needles as powerful arrows and grappling hooks. All’s fair in a fight against the forces of evil. Ahead lies only darkness
Each level takes place in a recognizable, but distorted fairytale world rife with combat, obstacles, and secrets. On this journey you will gain experience, master and branch out your skills, and overcome a multitude of challenges — from fighting blood-thirsty rubber duckies to exploring the giants’ castle in the clouds. The Darkest Tales is a game with deep and mysterious lore. As you progress and defeat monsters, you’ll unveil the mysteries of this nightmarish world. How will this tale end? It’s up to you to decide.